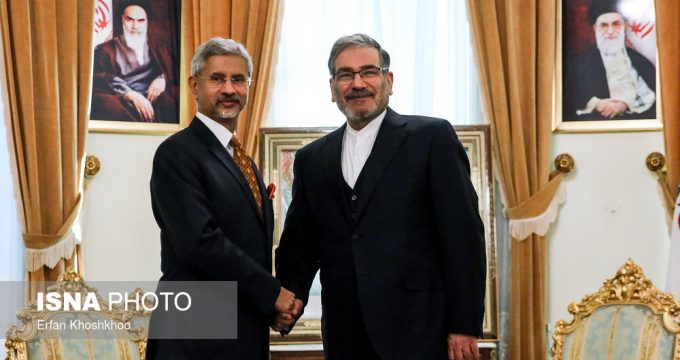 Ali Shamkhani made the remarks in a meeting with the visiting Indian Minister of External Affairs Subrahmanyam Jaishankar in Tehran on Monday, during which the two sides discussed the most important bilateral, regional and international issues.

Mentioning sanctions and terrorism as the two main components of the United States’ strategy against independent countries, Shamkhani said, “Through collective efforts, we can not only repel these two inhuman threats, but also delineate new horizons for progress by relying on indigenous capabilities of regional countries.”

He added that terrorism and extremism are the main common threats to all regional countries, saying, “Joint cooperation and the establishment of regional mechanisms to counter common threats will prevent foreign countries’ intervention [pursued] under the pretext of countering the threat of terrorism.”

In a tweet on Sunday, Iranian Foreign Minister Mohammad Javad Zarif said the US’ hostile policy of imposing sanctions is indicative of a “reckless addiction” that the White House has toward not only Iran but also other world countries.

“The US’ approach to sanctions betrays a pathological and reckless addiction—a condition that renders no bounds or boundary to what the US may or may not do,” Zarif said.

Elsewhere in his remarks, Shamkhani pointed to historical and cultural commonalities as well as deep-rooted relations between Iran and India and said, “Tehran and New Delhi can play an important role in containing and managing regional crises by strengthening relations at all levels while serving both countries’ interests.”

In another post on his official Twitter account on Sunday after co-chairing the 19th session of the Iran-India joint economic commission, the Iranian foreign minister hailed longstanding relations between Iran and its southern Asian ally, emphasizing that relations between Tehran and New Delhi are unbreakable.

During the Monday meeting, the Indian foreign minister, for his part, said bilateral cooperation in the fields of developing the Iranian port city of Chabahar and creating new infrastructure in the sectors of energy, trade and the transit of goods would significantly contribute to regional economic growth as one of the important necessities for stability and security.