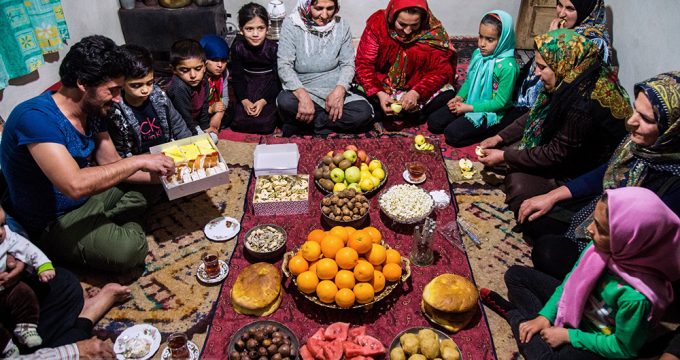 Yalda Night, or how Iranians celebrate the winter solstice

MNA | Marjohn Sheikhi: Yalda Night (or Shab-e Yalda; also, Shab-e Chelleh) is an ancient Persian festival, which basically celebrates the coming of the winter solstice: the longest and darkest night of the year.

With the speed the world is hurling toward the age of technological dominance, it becomes harder and harder each day to preserve traditions and customs. Sometimes, it’s less of a question of ‘do I have time for this?’ than ‘is it even necessary anymore?’

There is no questioning the necessity of technology in everyday life now that we have come to grow so much reliant on it for any minuscule or grand task, yet there is an inevitable mournful sense of loss as we let go of our traditions to embrace the modern life in all its magnificent and at times abhorrent glory. Some people are readier to let go of the past and move forward than others; some traditions disappearing faster than others. Some losses felt more acutely than others. It’s just how it is, I guess. As we race through life, old, and slower, things are bound to lag behind and ultimately left in the dust.

Yet, for some reason, Yalda Night isn’t one of them. Not yet, and hopefully, not for many generations to come.

Yalda Night (or Shab-e Yalda; also, Shab-e Chelleh) is an ancient Iranian festival, an intangible cultural heritage now shared by a majority of West and Central Asian countries, which basically celebrates the coming of winter solstice: the longest and darkest night of the year, or in more scientific terms, the moment when one of the Earth’s poles has its maximum tilt away from the Sun.

This special phenomenon, which occurs twice a year once in each hemisphere, marks the symbolic death and rebirth of the Sun; as such, Yalda Night has come to be recognized as a celebration of regeneration, renewal, and self-reflection.

Yalda has its roots in the Zoroastrian tradition, and is said to have borrowed its name from a Syriac term meaning ‘birth’. It originated as a custom to protect people from evil forces during the longest night of the year which was thought to be especially ripe with evil activities (something like Halloween, if you will). Hence, it became a custom to gather as many people as you can in one place, because there is safety in numbers and all that.

This year, Yalda has fallen on Saturday (December 21), which isn’t as ideal a time for throwing parties as you’d think if you’re from one of those many countries with Saturdays and Sundays as the weekend. In Iran, Saturday is actually the starting day of the week, but I doubt this would deter anyone from staying up late to enjoy the much-anticipated festivity.

If one were to ascribe a color to Yalda Night, it would be red. Red pomegranates, red watermelons, red apples, red sweets, maybe even the brownish red of well-brewed tea. Pomegranate is an inseparable part of the festivity as it is the special fruit of cold seasons and was known among our ancestors as a source of fertility and abundance.

Another important, indispensable presence on a Yalda table is aajil, or what you would otherwise know as ‘trail mix’, but imagine it in much more extravagant terms. The aajil of Yalda Night, in its fanciest composition — is indeed a very expensive treat, but people will try to include some of its elements nonetheless. This delicious treat is a mix of sweet and salty flavors that include seeds, dried fruits, and nuts of all kinds: hazelnuts, pistachios, cashews, almonds, walnuts, etc.

Basically, there is no rule on what you should eat on Yalda Night. Some parties include pan-roasted pumpkin, baklavas, pashmak (a type of Iranian cotton candy), or even popcorn. As long as there are enough edible items on the table to keep you going for the whole party – which usually lasts a few hours after midnight – then you’ll be alright.

Yalda, however, is not only about eating (although it’s a near enough thing). The festivity comes with a tradition highly popular and still in practice among many Iranians, namely ‘Fal-e Hafiz’, which is basically an Iranian way to tell fortunes by consulting with the mystic poems of the 14-century Persian poet Hafiz and seeking guidance from them. The ritual includes three steps: 1) think of something you need guidance for (for example, career prospects). 2) close your eyes. 3) open the Divan of Hafiz and read the first ghazal (ode) on the right page. There, you have your guidance. But since interpreting the poems and fitting them to your situation is not something anyone can do, you need someone right for the job to get the most out of the ritual. If there is no one qualified at hand, then just read the poem out loud and enjoy the rich poetry on its own. (Some books of Hafiz poetry come with simplified interpretations. They’re nothing fancy, of course, but will make for a fun time).

Yalda Night, in its essence, is an opportunity to gather members of a family, relatives, and friends together for a good time. Usually, people tend to gather at the house of the oldest relative, like grandparents’, and each family may bring something to the party as an edible contribution. The focus on the significance of family and togetherness sometimes goes so far that the use of any technology (TVs, smartphones, etc.) that could disrupt this huge traditional reunion is forbidden.

Iran has submitted the celebration of Yalda Night to UNESCO for a multinational inscription of a shared intangible cultural heritage. The case is still open on UNESCO’s website, and according to relevant officials, will be completed next year.