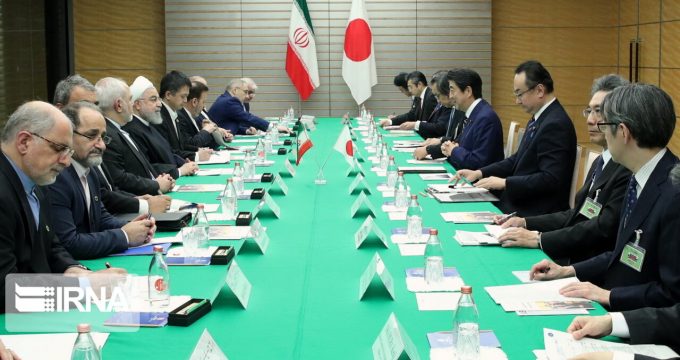 Rouhani in a meeting with the Japanese PM: We welcome all countries’ cooperation in establishing peace, security in region

Speaking in a meeting with the Prime Minister of Japan on Friday in Tokyo, Dr Rouhani said, “The Islamic Republic of Iran has always attempted to contribute to establishing peace in the region and the world with the help of regional countries and its neighbours, and letters have been sent to regional leaders in this regard”.

President Rouhani, who is in Japan at the official invitation of the Japanese PM, appreciated Japan’s backing of the HOPE initiative and said, “Iran has always carried out its responsibility in ensuring security in the region and we believe that the security in the Persian Gulf has been compromised by foreign countries”.

“We need to root out unilateralism to be able to protect the security in the region and make those who follow routes other than cooperation based on international regulations understand that they must choose another path,” said Rouhani.

“I am happy that we are holding our third meeting at the 90th anniversary of the establishment of political relations between the two countries,” he said.

The President also stressed the importance of deepening relations between Iran and Japan in all fields of mutual interest, saying, “The two countries can promote relations and cooperation in many fields, including energy, science and technology, medicine, tourism, sports, customs, industry, and economic and commercial fields”.

All countries have to stay committed to UNSC Resolution 2231, said Rouhani, adding, “The United States’ sanctions are considered a kind of economic terrorism and countries that are active in the field of countering terrorism must counter the US’ move”.

“Iran has exerted all its efforts to save the JCPOA within the framework of its interests, and will continue to do so, and we call on all other JCPOA signatories to live up to their commitments,” said Rouhani.

He added, “Without a doubt, this will be the key to the survival of the international agreement and countries can force the US to correct its mistakes and return to the right path”.

On cooperation between Iran and other countries, Dr Rouhani said, “We welcome any plan that can increase economic exchanges, especially in the field of energy and increasing oil export and sale”.

Stating that Iran’s step-by-step reduction of its JCPOA commitments after the US’ withdrawal from the deal and Europe’s failure in living up to its commitments are based on the deal itself, he said, “We believe that the JCPOA is an effective model for reading peace and friendship among all countries”.

He also went on to state that the US’ withdrawal from the deal and imposition of unprecedented economic sanctions against the Iranian nation have not been to anybody’s benefit, saying, “The US’ lack of commitment damaged not only a major international agreement, but also peace and friendly political relations among countries”.

The Islamic Republic of Iran welcomes any effort by any country in saving the JCPOA and protecting peace and stability in the region and the world, said Rouhani, adding, “Naturally, we do not turn down any negotiation and agreement that serve our interests”.

“Iran has proved it in these years that it secures its interests through logic and dialogue, and has always believed that effective, sustainable agreements can be achieved through the logic of negotiation and a win-win prospect,” he added.

The President of the Islamic Republic of Iran also said, “The way the US illegally withdrew from the JCPOA showed that this move was a damage to an international agreement and peace and security, and it is indeed not beneficial to neither the US, nor any of the signatories to the deal, and that sanction yields only lose-lose results for everybody”.

He also expressed hope that all countries, including Japan, do their best to save the JCPOA.

At the same meeting, Prime Minister Abe Shinzo of Japan said, “Iran-Japan relations have entered its 90th anniversary and the visits of the two countries’ officials have contributed to further development of these relations”.

Japan is willing to cement ties with Iran in all fields of mutual interest, he said, adding, “We are determined to deepen our ties and cooperation with Iran, especially in consular and technical fields, medical management, disaster management and earthquake”.

Supporting the HOPE Initiative, Prime Minister Abe said, “Ensuring regional security is very important for all countries that come and go to this region and we appreciate Iran’s constructive role in securing peace and stability in this region”.

He went on to state that Japan supports the JCPOA and will continue its efforts in saving the deal, saying that his country has begun cooperating with three European countries in this regard.