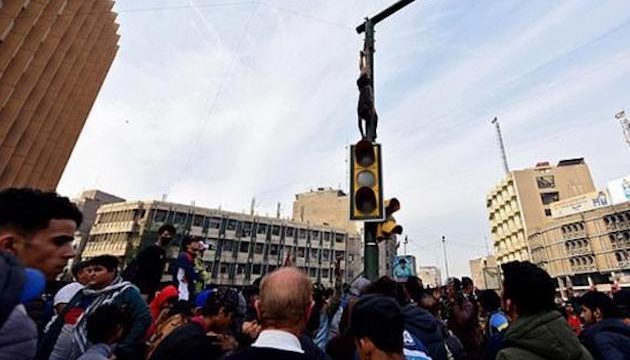 Iranian Diplomacy | Seyed Ali Mousavi Khalkhali: What we witnessed in Iraq on Thursday was nothing but a free fall of morality. Public lynching of a 16-year old while the crowd and security forces were standing by reveals nothing but the free fall of moral values. To drag a young man out of his house because he wants to get rid of loitering thugs drinking around his house and harassing his family, pulling his body on tarmac, hanging him from a lamp post, and mutilating him afterwards, while large crowds were just watching, cheering and recording the scene with their cell phones and taking selfies means nothing but moral breakdown in the 38-million-strong Iraqi society. The security forces remained silent and did not interfere allowing the criminals to do their job to the end.

The indifference of security forces

Shockingly, the security forces present at the crime scene were standing by in a corner or among the crowd and doing nothing but to watch, turning themselves into accomplice for the criminals. The Iraqi Interior Ministry issued a statement on Friday, claiming that the security forces did not intervene in the incident since they did not want to be part of the fight. The only justification can fathom is the lack of motivation among the security forces.

With resignation of a government, from the prime minister to the ministers everyone prefers to stick to minimum obligations and avoid additional responsibility. This is the exact situation in Iraq, where all groups are looking to sacrifice someone for their interests or purposes to evade responsibility. An innocent person or group can easily turn into a scapegoat in such a situation.

Two and a half months after the eruption of Iraqi demonstrations, security forces have been severely accused by political groups, and even international organizations, for acts of violence, without taking into account the circumstances. Several security forces have been dismissed for allegedly mistreating demonstrators, showing how the security forces and the police feel forsaken. The situation becomes aggravated with a failing government where no one is willing to accept responsibility. So it may be possible to justify why the security forces did not react at Thursday bitter incident. However, the question still remains as to why their human emotions was not stimulated to show a reaction. The blame is on those who were simply seeking the ouster of Adel Abdul Mahdi’s government without any alternative plan.

Indifference of the people

The indifference and even worse, the celebration by the people at the crime scene is shocking. How can they beat an innocent teenager in front of hundreds of people, kidnap his sisters, strip the victim naked, and hang him, with people watching as if it were a theatrical scene? Strangely enough, the perpetrators were between the ages of 18 and 25.

One can compare read the Iraqi society against the novel “Conversation in the Cathedral” by Mario Vargas Llusa, in which the author describes the social and moral decay under the shadow of sheer despotism; or to the Cambodian society during the four years of Pol Pot’s rule where crime was an everyday business. In Iraq, the thirty-one-year dictatorship of the Ba’ath Party and Saddam Hussein has undone the moral fabric of the society. Even after the overthrow of the Ba’ath Party, for at least 15 years, violence, outrage and revenge by terrorist groups was so intense that people violence became internalized among Iraqis. With incompetent parties, lack of culture-building organizations, the absence of intellectuals, culturati, and sociologists, Iraq has faced decline. The downward trend does not stop even with the change of generations, unless the community finds a way to prevent this moral collapse.

The sudden opening of once closed borders and Iraqis’ encounter with modern technology, without having previous education and cultural background, has added to the chaotic social situation of Iraq. High divorce rate over the past ten years, sharp decline in the quality of education and changes in the quality people’s lives are well visible.

Those who watched the crime against an innocent human being in Iraq on Thursday were like characters in computer games: for them, killing was so banal that they did not lift a finger.