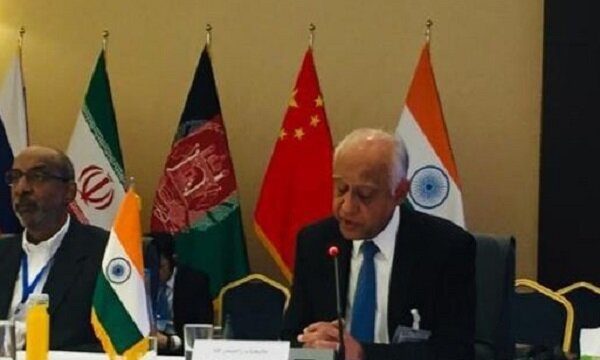 “The Joint investments by Iran and India in Chabahar will be a unique opportunity for the development of Afghanistan’s economy,” Rajinder Khanna said in Tehran on Wednesday, while addressing the 2nd session of the Regional Security Dialogue, which is focused on Afghanistan.

It was in 2003 that India first proposed developing the Chabahar Port seen as a gateway for the country to access the landlocked markets of Afghanistan and Central Asia, as New Delhi’s tense ties with Pakistan blocked overland trade through Pakistan.

The Indian official also referred to the issue of Afghanistan peace and security, saying, the peace talks should be conducted with the involvement of the legal government of Afghanistan.

Khanna stressed that other countries should play a facilitating role in this regard.

“Security issues may not be tackled but through active cooperation among the regional countries,” he added.

He noted that progression of sustainable peace in Afghanistan will help cut the presence of those who pursue goals other than peace and security in that country.

The Regional Security Dialogue kicked off in Tehran on Wednesday, with a focus on Afghanistan and a comprehensive fight against various forms of terrorism in that country. The national security advisers and secretaries of Russia, China, India, Afghanistan, Tajikistan, and Uzbekistan are taking part at the session.