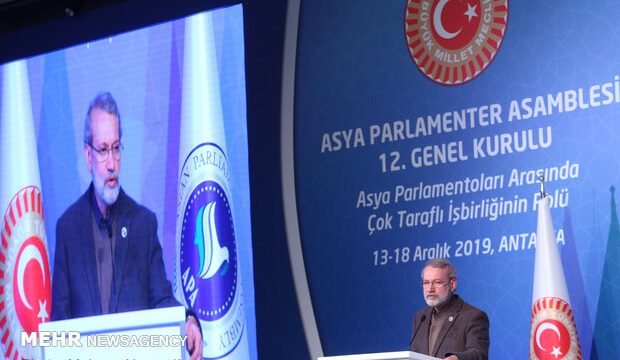 We have frequently been faced with hostile measures including tariff war with China, putting sanctions on Russia and Iran and etc., which proves the fact that westerners, in particular the US, cannot tolerate improvement of Asian countries, he added.

Despite all the organized plans, Asia will have a crucial and leading role in the temporary world, Larijani said.

“Terrorist measures have been taken under the support of the US,” he said, “Regarding American efforts to dominate oil and capital resources in the regional countries, it is vital to establish Asian commercial structures, Asian financial transactions, Asian military and security treaties, and Asian science and technology cooperation.”

The APA was established in 2006 at the Seventh Session of the Association of Asian Parliamentary for Peace (AAPP). It has 42 Member Parliaments and 16 observers. The assembly has been created as a forum to exchange views, ideas, and experiences for developing common strategies and promoting peace in Asia and the world, according to its website.