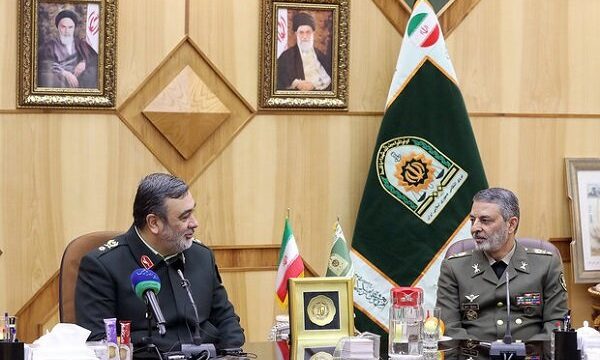 MNA – The Commander of Iran’s Army Major General Seyyed Abdolrahim Mousavi said that the army forces of the Islamic Republic of Iran will stand by the Islamic Revolution at any cost.

He made the remarks on Thu. in his meeting with Iran’s Police Commander Brigadier General Hossein Ashtari and said, “despite all animosity and hostility of the global arrogance waged against the Islamic Republic of Iran, they could not harm the country. If unity, amity and empathy is practiced in the country among all walks of life, enemies cannot damage the country.”

He once again reiterated that Iran’s army forces have stood by the Establishment, jurisprudent and the revolution and added, “in spite of all hostilities orchestrated against Iran, they could not incur any damage to the country.”

It is for years that enemies of the country have planned to mar real image of the country and for realizing their malicious objectives, they [enemies] have spent huge costs to undermine Iranian security and turn Iran into an unstable country in the region but vigilance of armed forces have nullified plots waged by enemies against the country, Brigadier General Mousavi highlighted.

Iran’s Army will spare no effort and make all its power to support the Law Enforcement Forces (Police) by all its means, Iran’s Army Commander Brigadier General Mousavi added.