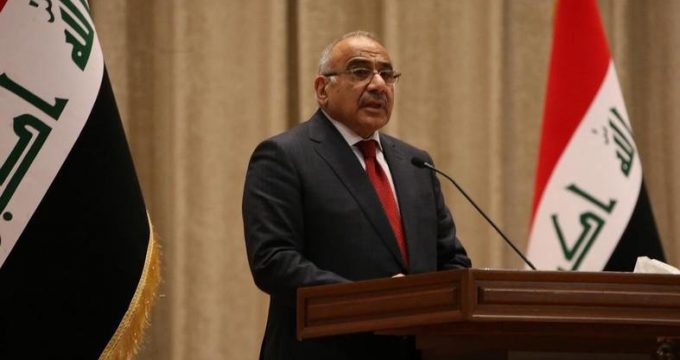 Iranian Diplomacy – Under the Iraqi constitution, the president must ask the grand coalition in the parliament to nominate a new candidate, which usually takes some time.

Although Iraqi political groups have always needed a lot of consultations to make the final decision, it seems even more difficult to agree on a candidate, especially as there is a pressure by the protesters.

Meanwhile, some figures are calling for the resignation of the heads of the three branches of the government and holding an early election.

Currently, the Iraqi president is extensively consulting with political groups and parliamentarians to make a final decision. Some conditions have been stated for the new prime minister that makes it even harder for the president to come to a decision.

According to Article 76 of the constitution, the president charges the candidate, who is nominated by the grand coalition, with forming a cabinet. If the nominee cannot establish a cabinet within the given time, he must resign or be removed, and the president should appoint another person to form a cabinet in 15 days. But, Iraq’s constitution has not specified whether or not the nominee should be a person from the grand coalition.

On the other hand, from the Iraqi observers’ point of view, by this mission, the Iraqi parliament has put Barham Salih in charge of making a decision. Now, the president should satisfy protesters and face the anger of those political groups that elected him to the post of president or take the political groups’ side and await the protesters’ rage.

The constitution has created a dilemma for the Iraqi president, so he has to decide to whether support protesters or the political groups.

Another issue is that there is no interpretation in the constitution to determine how many times the president can nominate a candidate.

If the candidates nominated by the president fail for several times, then what will happen next? This is an issue that should be determined by Iraq’s Federal Supreme Court.

The Parliament’s legal committee member Bahar Mahmoud told Al-Araby Al-Jadeed that according to Article 81 of the constitution, in case the post of prime minister remains vacant, the president will serve in the position for 15 days. The premiership vacuum happens in cases of dismissal, resignation, permanent disability or illness that prevent performing the prime ministerial duties. In the current situation, any action, which is not under the article, is illegal.

Ali al-Tamimi, an Iraqi legal expert, told Al-Araby Al-Jadeed that if the president cannot find a replacement for the prime minister by the end of 15-day period, Adel Abdul Mahdi will remain in power for another 30 days. After this period the president will be in charge of running the country for 30 days. If a new premiership candidate is not found, Iraq will face a constitutional vacuum. The constitution has no solution to the problem because such a situation has not been predicted.

The constitutional deadline is not observed in many cases, so it is expected that Abdul Mahdi remain in power for the next six months. This matter will create constitutional problems, and the decisions made by the prime minister will not be legally valid.

But it has not yet been determined that who will be the next prime minister of Iraq, especially given that the life of the Iraqi caretaker government is not more than a month under the constitution, and consultations have not yet come to a conclusion.

Indeed, the process of electing a new prime minister will be very difficult. Earlier, a source close to the Iraqi president announced that he had not yet received a name for the prime minister.

Abdul Mahdi said that the cabinet had only two choices, either to resign, which is what he did, or to vacate the prime ministerial position, and in that case the president would serve as prime minister for 15 days until a new prime minister was elected.  “Finally,” he said, “We decided to resign after consultations with the Federal Court.”