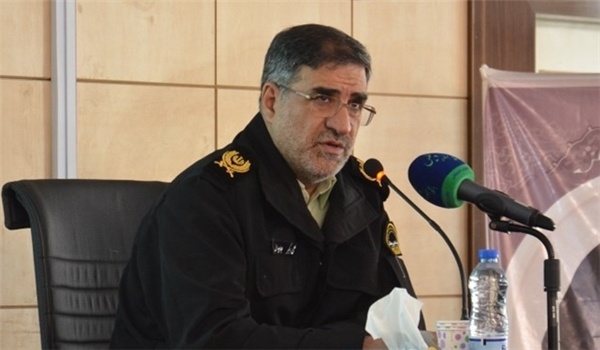 “Police officers could identify 4 ringleaders of the riots in extensive operations after coordination with the judiciary officials,” General Javidan told reporters in Tehran on Tuesday.

He added that the arrested people are aged between 20 to 35, noting that one of them had fomented insecurity in the town of Javanroud and three others in the provincial capital city of Kermanshah during the riots.

General Javidan said that the detainees are accused of provoking people to riots, destruction of public properties and attacking the police forces, adding that 29 hunting guns used in the recent unrests have also been discovered in their hideouts.

In relevant remarks last Tuesday, General Javidan announced that 4 suspects who had collaborated in murdering Major Iraj Javaheri during the recent riots in the Western Iranian province had been detained.

“Major Iraj Javaheri, one of the officers of Elahiyeh police station, was martyred in Kermanshah city in clashes with the outlaws and rioters after the riots on November 16,” General Javidan told reporters in Kermanshah.

He added that the Iranian security forces identified and arrested 4 culprits behind the murder of Major Javaheri in Kermanshah city and in another province in Central Iran.

General Javidan said that all arrested suspects had previous records of criminal perpetration, noting that the murder weapons have also been discovered from their hideouts.

On November 15, the government raised Iran’s extremely cheap gas price in order to moderate the national consumption rate, which stands at 110 million liters per day, 40 million liters above the maximum domestic requirement.

The government also announced a number of aid and subsidiary programs to protect vulnerable households from the adverse effects of the measure.

The price reform, required by Iranian legislature and essential as US-imposed sanctions seek to deplete Iran’s budgetary resources, had been long delayed due to concerns regarding the move’s probable backlash.

Intelligence reports and eye-witness accounts showed that the rioters who had taken advantage of public protests against gasoline price hikes to stir chaos in the country were armed with different weapons.

The protest rallies of Iranian people against the gasoline rationing turned violent since the first hours of the gatherings after the rioters used weapons.