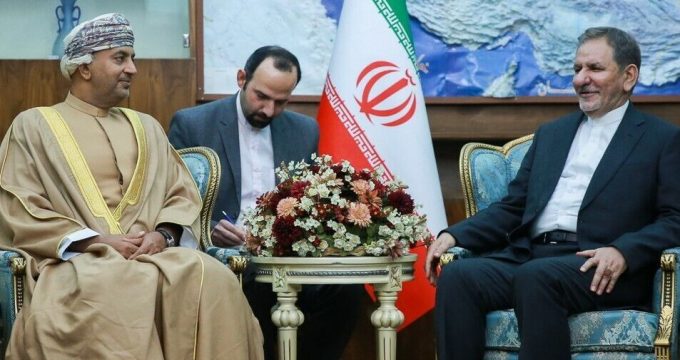 Jahangiri says Tehran has no limitation to develop ties with Muscat

IRNA – First Vice President Eshaq Jahangiri said on Sunday that the Islamic Republic of Iran has no limitation to develop relations with Oman, adding that Tehran and Muscat have extensive capacities for cooperation.

Jahangiri made the remarks In a meeting with Ali bin Masud al- Sunaidi, the Minister of Commerce and Industry of Oman.

Jahangiri said that political relations between Iran and Oman are at the highest level, adding that the development of cooperation between Tehran and Muscat is beneficial for the Muslim World and the countries of the region and will not be against anyone.

The Vice President stated that The Islamic Republic of Iran is ready to develop bilateral and multilateral relations with Oman.

He expressed hope that the commission helps remove obstacles to mutual cooperation and develop a roadmap for enhanced relations.

*** We are witnessing direct and indirect interaction between private sectors

Ali bin Masud al-Sunaidi said in the meeting that fortunately, this year we are witnessing many direct and indirect interactions between the two countries’ private sectors which herald a promising prospects for trade ties between Iran and Oman.
Ali bin Massoud al-Sanidi, referring to the presence of  30 Omani businessmen on his delegation, said: “There have been constructive meetings and negotiations between the businessmen of the two countries and it is time to make a big leap in business relations.”

The Omani minister expressed pleasure with Iranian facilities available for health tourists and pilgrims from the Omani nationals.

He said that the economic and trade relations of the two countries require a great leap forward, and I hope that with the support of high-level officials in both countries we can achieve this important goal.

Ali bin Masud al-Sunaidi said on Saturday that his country has a special interest in developing trade relations with Iran.

He made the remarks in the 18th Iran-Oman Joint Economic Committee meeting.

The global economic crisis has created many problems for many countries and to address the challenges, Oman will do its best to enhance trade and economic relations with countries such as Iran, he said.

The two countries can expand the volume of trade in cooperation with the private sector, he added.

The minister noted that he is accompanied by that more than 30 Omani businessmen who represent all sectors of the economy and strive to develop cooperation with various sectors of Iran’s economy.

Oman will do its utmost in the area of ​​the maritime agreement signed between two countries to encourage investment and increase the level of trade cooperation, he added.