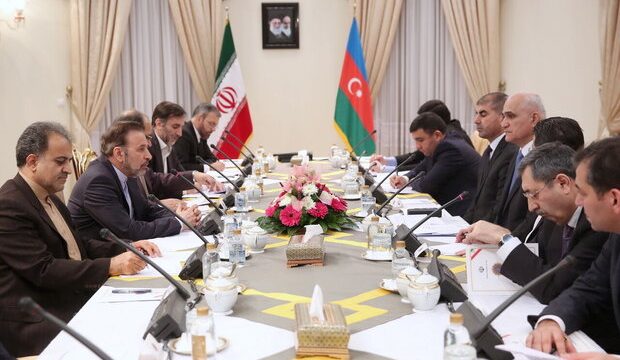 MNA – Iranian President’s Chief of Staff Mahmoud Vaezi hailed the “strategic ties” between the Islamic Republic and the Republic of Azerbaijan, calling for concerted efforts to use all capacities in the interest of the two and all regional states.

In a meeting with Azerbaijan Republic’s visiting Deputy Prime Minister Shahin Mostafayev on Tuesday, Vaezi said Tehran-Baku preferential trade agreement has made good progress, and the development of the two countries’ relations is strategic.

Mostafayev, for his part, hailed the amicable relations between Iran and Azerbaijan, saying that bilateral ties are currently at the highest level and found strategic dimensions.

He added that the Tehran-Baku relations in the political, economic, cultural, trade and transportation spheres are growing and Baku is set to further improve these ties.

On the sidelines of the meeting, Vaezi said the for the Azeri President Ilham Aliyev’s imminent visit to Tehran following President Rouhani’s official invitation.

“We are determined to discuss capacities for promoting cooperation in various fields and draft agreements to be signed during his visit to Tehran,” he said.