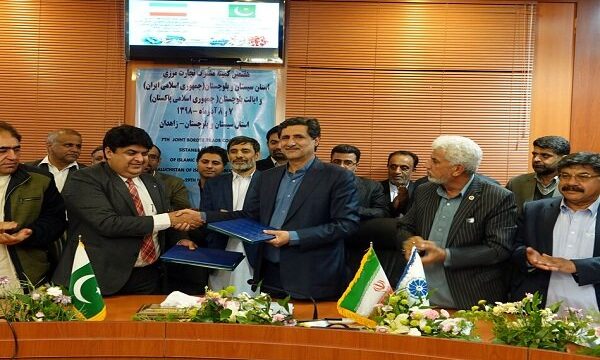 MNA – The 7th Joint Committee on Border Trade between Iran and Pakistan was held in Zahedan, Sistan and Baluchestan Province, southeast of Iran.

The President of Industry, Mine and Trade of Sistan and Baluchestan Province Nader Mirshekar said that Iranian and Pakistani delegations met and held talks on the economic and trade exchanges between two sides.

Sistan and Baluchestan Province in Iran and Balochistan in Pakistan play a special role in the economic and trade exchanges between the two countries, he added.

In this regard, some issues including transportation and the development of rail and land infrastructure are discussed during the meeting, he noted.

Mirshekar mentioned that the joint border agreement between Iran and Pakistan was also signed by the two parties in this meeting.

The parties emphasized to implement all decisions made in the Joint Committee on Border Trade between Iran and Pakistan, he said.

The main emphasis of the Joint Committee on Border Trade was on improving bilateral trade, economic relations between Iran and Pakistan, he added.