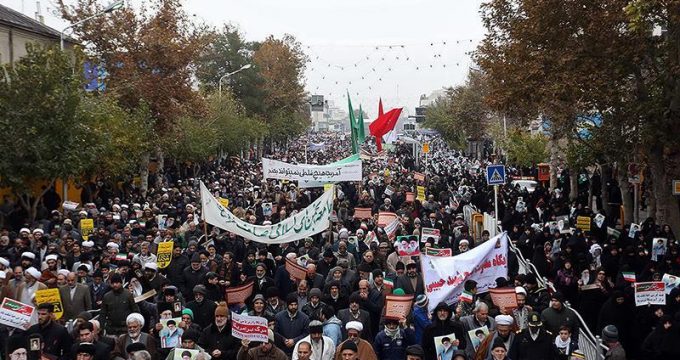 Television channels showed crowds chanting in support of the Islamic Republic and vowing “death to America” in Mashhad, Shiraz, Qom and Esfahan. The vast majority appeared to be conservative supporters of the cleric-led establishment who often attend Friday prayers.

Human rights group Amnesty International has said that at least 106 people were killed last week as protesters clashed with security forces, while officials in Iran put the death toll at 12.

Ebrahim Raisi, the head of Iran’s judiciary and a close ally of Khamenei, promised to deliver “severe punishment” to anyone undermining security, the semi-official Tasnim news agency said.

Hundreds of people linked to the protests have been arrested, including alleged ringleaders with ties to foreign security services, Tasnim reported. That echoed claims from officials in Tehran that the demonstrations — triggered by a government decision to hike the price of gasoline — were perpetrated by its enemies including the U.S., which said it supports the protesters.

Protests erupted across Iran after a special economic task-force including President Hassan Rouhani, Raisi and the head of parliament abruptly raised gasoline prices overnight on Nov. 14 as part of efforts to counter the impact of U.S. sanctions on the economy.

Late on Nov. 16, authorities cut access to most of the internet, citing security concerns, leaving tens of millions only able to use official domestic websites. By Thursday, the restrictions had been eased in some provinces, several news agencies reported, citing unnamed officials at the Ministry of Information and Communications Technology.

U.S. sanctions are meant to curtail Iran’s influence in the Middle East and weaken its leadership. The International Monetary Fund expects Iran’s recession to deepen this year, with gross domestic product contracting 9.5%.
(Updates with state of economy in last paragraph, other details)