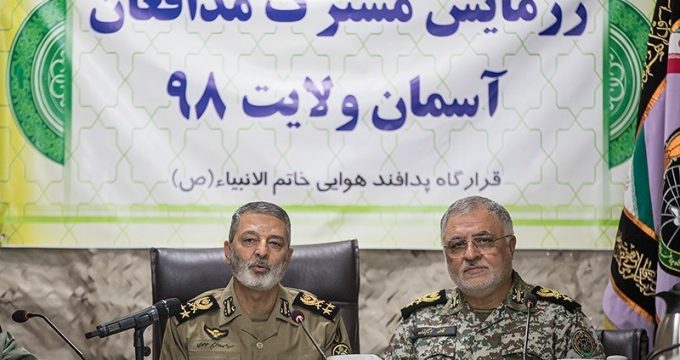 Battle to continue till surrender of the Arrogance: Army Cmdr.

MNA – Commander of Iran’s Army Major General Abdolrahim Mousavi said that the battle against dominating powers will go on till they give in.

“As long as we speak of independence and countering dominating powers, the Arrogance will stand against us and this battle will go on to a point where they accept to give in to what is right,” he told reporters on Thursday on the sideline of ‘Modafe’an-e Aseman-e Velayat 98’ [Guardians of Velayat’s Sky-98] joint military drill in the central Iranian province of Semnan.

He went on to say that Iranian armed forces have killed enemies’ hopes for damaging the country.

The country’s armed forces are staging a joint air defense drill in central Iran, in an area of 416,000 square kilometers.

“One of our aims is to test combat capability of air defense which currently stands at the forefront [of countering enemies],” Commander of Army Air Defense Force Brigadier General Alireza Sabahifard said on Thursday, highlighting that Iran’s air space is ‘red line’ and any aggression by enemies will not go unanswered.

Meanwhile, Mohammadreza Aliannejad, the drill’s spokesman said that ‘surprise’ is a major element of this drill. “We don’t know whether the drill will start in the coming hours or tomorrow,” he said on Thursday noon.

He also said that the drone units of IRGC and Army will play the role of aggressive forces while air defense systems of Army and IRGC will counter the threats.

The spokesman noted that the recently-unveiled “15th of Khordad” will probably be used during the war game.