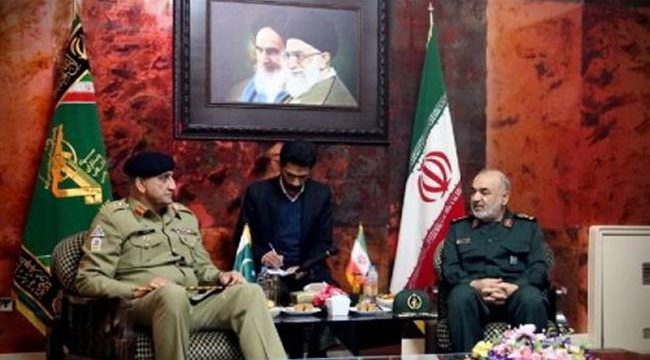 Salami said the United States and Israel are the common enemies of the Islamic world, praising Pakistan’s efforts in reducing regional tensions.

“In defending the Islamic nations, we bear in mind the totality of Islamic territories and will never differentiate between Shia and Sunni [Muslims],” the IRGC chief added.

For his part, Bajwa said that Iran and Pakistan enjoy many similar religious, cultural and historical traits, and that having common border areas allows for the further development of mutual cooperation between the two.

Bajwa also expressed gratitude for Iran’s pivotal role in fighting Takfiri terrorism in the region, specifically in Iraq and Syria.

Among the most important topics discussed in the meeting were developing military and security ties, cooperation in countering terrorist and criminal groups along border areas, experience sharing and boosting collaboration in training and research.

Bajwa, who is in Iran at the head of a high-ranking military and security delegation, held talks with various top Iranian officials on Tuesday, including Iranian President Hassan Rouhani and Iranian Foreign Minister Mohammad Javad Zarif.