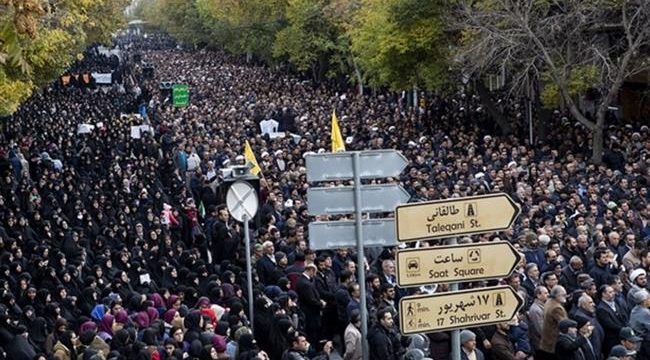 Press TV – People have taken to the streets across at least three major Iranian provinces to denounce the recent acts of rioting and vandalism, which have hit several cities following a wave of protests against a government decision to increase gasoline prices.

The rallies were held during Monday and Tuesday in the northwestern East Azerbaijan and Zanjan Provinces as well as the southwestern province of Chaharmahal and Bakhtiari, Mehr News Agency reported.

The government raised the prices last week in order to moderate the national consumption rate, which stands at 110 million liters, 40 million liters above the maximum domestic requirement.

The move prompted some peaceful protests, but anarchists and agitators sought to abuse the situation by destroying public property and setting ablaze banks and gas stations among other facilities.

The pro-government rallies were held days after Leader of the Islamic Revolution Ayatollah Khamenei voiced support for the decision to raise the prices, and warned that the peaceful protests could be tainted by violence orchestrated by certain elements.

The Iranian administration and military have issued a stern warning, asserting that those seeking to cause unrest would be dealt with decisively.

The demonstrators on Tuesday distanced themselves from the rioters and expressed their resentment at the foreign forces openly backing the anarchists.

On Saturday, US Secretary of State Mike Pompeo voiced outright support for the acts of violence, reiterating Washington’s claim that “the United States is with you.”

Various Iranian officials have condemned the remarks as reprehensible and duplicitous.

The rallies in Tabriz were launched from the city’s Prayer Grounds and led the participants to the central Sa’at Square. The demonstrators shouted such slogans as “Protest is the people’s right, [but] disturbance is the enemy’s doing,” “Submitting to the Leader is the only road to salvation,” “The US be ashamed [of yourself], abandon [your] intrigue.