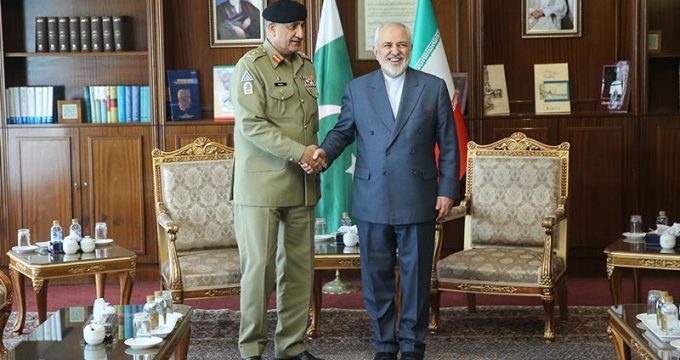 Tasnim – Ranking diplomatic and military officials from Iran and Pakistan discussed the ongoing developments in the region, including the situation in Afghanistan.

Chief of the Army Staff of Pakistan General Qamar Javed Bajwa, who is heading a high-ranking military and security delegation in his visit to Iran, had a meeting with Iranian Foreign Minister Mohammad Javad Zarif in Tehran on Tuesday.

In the gathering, the two officials discussed a broad range of issues, including the political, economic and military relations between Iran and Pakistan.

Zarif and Bajwa also talked about the security of the common border and the latest status of a number of Iranian border guards who have been abducted by the Pakistani-based terrorist groups.

They also discussed regional cooperation and the ongoing developments in the region, including the situation in Afghanistan.

In April, Iranian President Hassan Rouhani and Prime Minister of Pakistan Imran Khan agreed to set up a joint rapid reaction unit along the common border to combat terrorism.