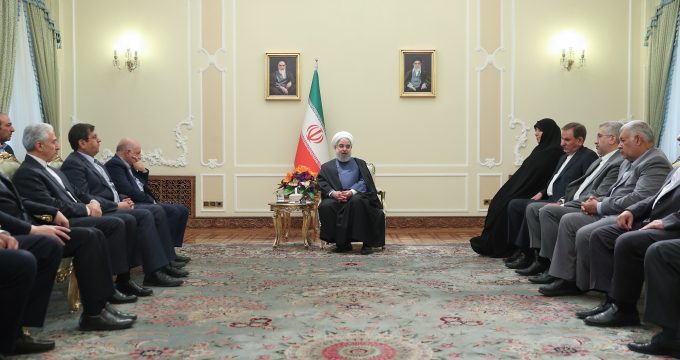 President.ir – Stressing the importance of government’s move to increase the price of petrol and helping the lower-income and middle classes of the society with its income, the President said, “This move will be beneficial to lower-income classes and can be effective in resolving their problems”.

Speaking on Friday in a meeting with cabinet members and a number of other officials, Dr Rouhani said, “The government was long looking for a way to help and support the lower-income classes who are under pressure because of economic conditions, but it was not able to do so because of low income sources and the budget”.

“Severe economic pressures were imposed on people’s lives this year and last year, and the government wants to support people by providing them with their essential needs,” he continued.

The President also added, “Around 75 per cent of people are under pressure and the other 25 per cent have good living conditions. Based on the calculations, 18 to 19 million families accounting for 60 million people will be covered by the government’s plan, which will be family-based rather than individual-based”.

“We are trying to be able to pay this amount to families on a monthly-basis, which will start at the beginning of Azar month,” said Rouhani.

He continued, “This will be a small help to the lower-income classes, which is imperative”.

Stating that that some believed that the price of energy in Iran is so much lower than other countries in the region, he said, “Of course, this will bring about corruptions such as smuggling and if we want to eliminate it, we need to increase the prices in a way that it is almost the same as our neighbouring countries, but we were opposed to that”.

“This was not done because the government believed that increasing the price to around 5 thousand tomans will have direct impact on people’s lives and increase inflation,” he said.

Dr Rouhani added, “The energy that is being consumed in Iran is very different from other countries throughout the world and it is a huge amount, which needs the culture to be promoted and good cars being produced”.

“The main goal of this move was to decrease the pressure that is on people on the one hand, and not increase the price for those who consume normal amount of petrol. This is why we set a price for the first 60 litres and an unsubsidised price for any amount above that,” he said.

The President of the Islamic Republic of Iran also went on to call on all ministers and related authorities to explain this clearly to the people, saying, “It has been 4 years now that the government has not done anything to increase the price of petrol and today, this is being done after 4 years”.

He continued, “We need to explain this to people, and that it will be beneficial to them, and the government does not in any way intend to take this money despite economic problems”.

Nobody must think that this has been done because of harsh economic situation, he said, adding, “It is not like this at all, and not even a rial of this money will be taken to the treasury”.

“This move will be beneficial to the people and those lower-income classes,” he continued.