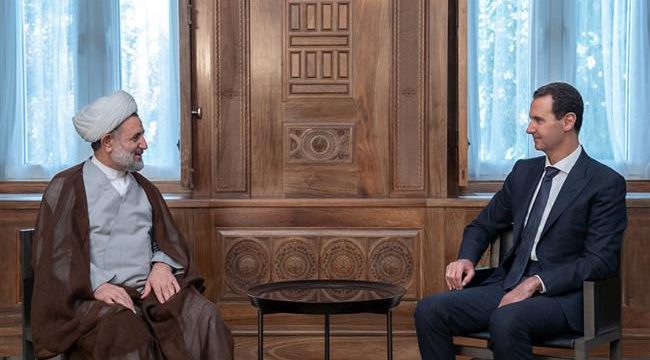 Press TV – President Bashar al-Assad has hailed Iran’s unwavering support for his country’s fight against enemies’ plots to fuel insecurity and instability in Syria and the entire region, saying that the war will end only through the eradication of terrorism.

President Assad made the remarks in a meeting with an Iranian parliamentary delegation, headed by Chairman of the Parliament’s Committee on National Security and Foreign Policy Mojtaba Zonnouri, in Damascus on Thursday.

“They are trying to pretend that it is possible to end the war through the constitutional committee. It is not true,” he said.

“The war did not break out because of differences over the constitution, but it started when terrorism began to kill and destroy,” the Syrian president added, emphasizing that eradication of terrorism is the only thing that can terminate the war.

Representatives of the Syrian government and opposition met earlier this month to discuss a future constitution, part of plans for a political settlement to end eight and a half years of war.

The members of the constitutional committee, which took almost two years of consultations to be formed, are tasked with reforming the Arab country’s constitution before it is put to the vote of the Syrian people.

Speaking at a news conference at the end of the first round of the constitutional committee on November 8, United Nations Special Envoy for Syria Geir Pedersen said reforming the country’s constitution is the first step toward the beginning of a political process that will lead to UN-supervised elections under UN Resolution 2254.

Back in September, United Nations Secretary General Antonio Guterres said an agreement had been reached between the government of Syria and the so-called Syrian Negotiation Commission – an umbrella opposition group supported by Saudi Arabia, on “a credible, balanced and inclusive constitutional committee.”

“It will be facilitated by the United Nations in Geneva,” Guterres told reporters, adding that it would be convened in the coming weeks.

Elsewhere in his remarks, President Assad emphasized that the resistance front’s commitment to unchangeable principles is one of the most important factors behind its power in the campaign against terrorism.

“The fight waged by us and our friends against the excessive demands of the West and colonialist countries will continue until the annihilation of their mercenaries,” the Syrian president added.

The senior Iranian parliamentarian, for his part, said Tehran and Damascus enjoy deep-rooted relations and are fighting against a common enemy.

Zonnouri added that Iran and Syria are on the frontline of the fight against the occupying regime of Israel, saying, “Iran will strongly defend the interests of its own and those of its allies in the region.”

He said Tehran welcomes the expansion of trade and economic exchanges with Damascus, stressing the importance of further strengthening of inclusive cooperation in the economic sector in order to help Iranian companies reconstruct Syria’s infrastructure.

Iranian President Hassan Rouhani said in February that the Islamic Republic is ready to help Syria with its reconstruction plans and restore stability to the war-ravaged country.

“The Islamic Republic of Iran, just like in the past, will stand by the Syrian nation and government,” Rouhani said in a meeting with his Syrian counterpart in Tehran.