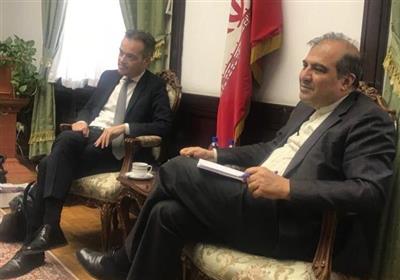 Tasnim – Two high-ranking officials at Iran’s Foreign Ministry held separate meetings with the Belgian Foreign Ministry’s Director-General for Multilateral Affairs and Globalization Axel Kenes about a range of issues, including the latest developments in the Middle East.

In a meeting in Tehran on Wednesday evening, Ali-Asghar Khaji, a senior assistant to Iranian Foreign Minister Mohammad Javad Zarif in special political affairs and senior negotiator in Yemen and Syria talks, talked with Kenes about the latest developments in Syria, including the situation in the northeast of Euphrates, the de-escalation zone in Idlib, the process of formation of Syria’s Constitutional Committee, the issue of refugees and reconstruction of Syria.

Kenes and Khaji also described the launch of the Syrian Constitutional Committee as a positive move and highlighted the major role of the Astana Talks in the peace process in the Arab country.

During the session, they also discussed the latest developments in Yemen and stressed the need to end the crisis in the Arabian peninsula country through political means.

In a sperate meeting on the same day, Kenes held talks with Iranian Deputy Foreign Minister for Legal and International Affairs Gholam-Hossein Dehqani.

The two sides exchanged views on various international issues including the full implementation of the 2015 nuclear deal, known as the Joint Comprehensive Plan of Action (JCPOA), and the UN Security Council Resolution 2231 by all parties.

Dehqani slammed the UN Secretariat’s reports on the implementation of UNSC Resolution 2231, which ignore the United States’ repeated violations of the JCPOA and the resolution.

He also underlined the significant role of other Security Council member states in opposing the US’ unilateralism and instrumental use of the UN bodies.

The Iranian diplomat also pointed to the one-sided approach adopted by the UNSC on issues like the Yemeni crisis and its insufficient attention to the humanitarian aspects of such crises.

He urged Belgium as a non-permanent member of the UN Security Council, which represents all other UN member states, to make further efforts to settle those crises peacefully.

Kenes, whose country acts as a facilitator of the implementation of the UN Security Council Resolution 2231, was on a two-day trip to Tehran.