But national security experts are concerned his cooperation may prove meaningless if President Donald Trump continues a baffling pattern of protecting Turkey and its second-largest state-owned bank, Halkbank, in his meeting with Turkish President Erdogan on Wednesday.

Trump’s embrace of Erdogan is among the biggest contradictions of his foreign policy, which has made sanctions and a hardline against Iran a trademark, they say.

“The president is pursuing maximum pressure on Iran, yet he is easing up on the bank responsible for the largest sanctions evasion scheme in modern history,” said Jonathan Schanzer, a former terrorism finance analyst at the U.S. Treasury Department.

The meeting in Washington comes weeks after Turkish troops invaded northern Syria, with Trump’s acquiescence, and then killed Kurdish fighters who were longtime U.S. allies. 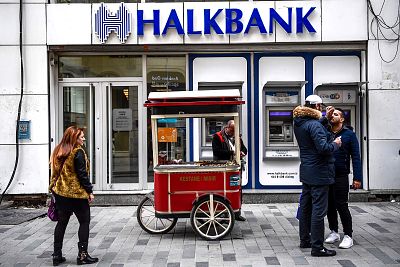 People walk by as a street vendor stands in front of a branch of the Turkish bank Halkbank on in Istanbul on Dec. 1, 2017.Ozan Kose

Days after that, the Justice Department indicted Halkbank, alleging it had helped Iran skirt sanctions by converting $20 billion in oil profits into gold purchases and other fraudulent instruments.

The indictment came three and a half years afterthe gold trader, Reza Zarrab, was arrested in Miami and began providing information, and nearly two years after Zarrab’s testimony was used to convict a Halkbank executive in a New York federal court of participating in the scheme.

Three Justice Department officials said the invasion ultimately led to the indictment because prosecutors gave up hope of Turkey coming to the table to negotiate a deferred prosecution agreement.

Erdogan’s government runs Halkbank. After pleading guilty to conspiring to skirt sanctions, Zarrab testified during the 2017 trial of Halkbank executive Hakan Atilla that Erdogan had personally approved the bank’s participation in the scheme.

Trump has previously pushed Justice Department officials to ease the pressure on Zarrab, according toseveral reports, and Erdogan may well raise the issue with him Wednesday. He did so with Vice President Mike Pence in Ankara last month. Pence says he referred Erdogan to the Justice Department.

A ‘warm relationship with Erdogan’

The Justice Department’s Halkbank indictment punctuates a series of decisions Trump has made regarding Turkey that have raised alarm among Democrats and Republicans on Capitol Hill, who believe they threaten U.S. national security interests.

Trump has a history of acting favorably to Turkey following private conversations with Erdogan. Most recently, a phone call prior to the U.S. withdrawal from Northern Syria remains shrouded in secrecy.

“His warm relationship with Erdogan is undermining his own legacy,” said Schanzer, noting the sanction-busting scheme occurred at the height of U.S. efforts to thwart Iran’s nuclear ambitions. Last week, former Trump National Security Adviser John Bolton accused Trump in a private dinner of being driven by his own personal financial interests in Turkey. Trump and his family have long had business ties in and with Turkey, the most visible example being the Trump Towers Istanbul, which licenses the Trump name. It is the organization’s first and only office and residential tower in Europe.

Last month, Trump called Erdogan a friend and a “very strong man,” applauding him for efforts such as the release of American pastor Andrew Brunson from Turkish imprisonment.

Trump remains sympathetic to Erdogan’s concerns about Halkbank, according to Sen. Lindsey Graham, R-S.C., who chairs the Judiciary Committee and is among the president’s closest allies. Trump “wants to be helpful within the limits of his power” in the “case involving the Turkish bank,” according to a transcript of a callGraham had with a Russian prankster impersonating Turkey’s minister of defense in August.

The call was not from the minister of defense, but Graham made Trump’s intentions clear. “He does not want that case to hurt our relationship,” Graham said of Trump.

For years, the bank was being investigated by the Justice Department for violating restrictions on Iran’s access to the U.S. financial system. Yet it wasn’t until days after a backlash to Turkey’s invasion of Northern Syria that Trump’s Department of Justice criminally charged Halkbank, a decision Erdogan called “ugly.”

The Halkbank indictment does not name individuals who might be subject to extradition. A spokesperson for the U.S. Attorney’s Office in Manhattan, which filed the indictment, declined to comment on Zarrab’s cooperation, whether it might be seeking arrests of those involved in the scheme or the timing of the indictment.

Multiple senior law enforcement officials say that while they had obtained information on the bank’s activities for years, including during the Obama administration, it was Zarrab’s 2016 arrest and cooperation with U.S. prosecutors that led to the conviction of former bank executive Atilla. He served 32 months in a U.S. prison and then returned to Turkey in July.

They say it was Zarrab’s cooperation and subsequent law-enforcement work to corroborate his information that helped build out the indictment against the bank last month. 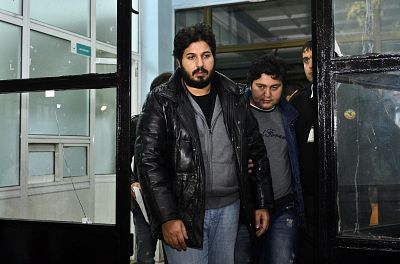 Reza Zarrab is taken to police headquarters in Istanbul on Dec. 17, 2013.Sebnem Coskun

Current and former Justice Department officials with knowledge of the case said prosecutors had withheld an indictment against Halkbank because they were holding out hope for a deferred prosecution agreement, an arrangement given to foreign companies in the past that typically brings an end to sanctions violations without criminal charges but with typically steep monetary fines.

“Halkbank is at the center of the ongoing scandal surrounding President Trump, Rudy

on the Senate Finance Committee said in a recent letter announcing an investigation of Trump’s advocacy for the bank. “They all appear to have been working toward the same goal of preventing criminal prosecution of the bank.”

The Turkey lobby in Washington

Turkey has had a robust lobbying operation in Trump’s Washington.

According to the Center for Responsive Politics, the average amount the Turks have spent on lobbying increased by more than 50 percent under Trump compared to the last year of the Obama administration. Turkey spent a total of $15.3 million combined in 2017 and 2018, according to a review done for NBC News.

Erdoğan had his first Oval Office summit with Trump five days after Turkey signed on with a lobbying firm owned by one of Trump’s top fundraisers, Brian Ballard, the “most powerful lobbyist in Trump’s Washington,” according to Politico. Ballard’sbundled contributions to the Trump Victory PAC reached almost $300,000 last quarter.

The president’s personal lawyer, Rudy Giuliani, has had strong ties with the Turkish government. Giuliani was acting as an unregistered lobbyist for Erdogan’s close friend, Zarrab, who also had an office in Trump Tower Istanbul. Zarrab hired Giuliani after being jailed in March of 2016 for money laundering.

Zarrab’s continued cooperation with the Justice Department is certain to make Erdogan nervous, according to a former Turkish official who spoke on the condition of anonymity.

Zarrab was very close to Erdogan’s inner circle, a fact revealed in a leaked Istanbul prosecutors report in 2013.

The report made clear the Erdogan regime’s ties to Iran, adding to the already clear ties to terror groups like Hamas and al Qaeda, says Schanzer.

In September, the U.S. Treasury sanctioned 11 Turkey-linked entities and individuals for supporting Hamas and other jihadist outfits.

Millions in Turkish payments to President Trump’s top Florida fundraiser and Giuliani and his firm Greenberg Traurig, came with access to the president and high-level members of his administration.

It’s part of a broader history of Trump doing favors for Erdogan.

Under 2017 legislation, the administration was supposed to sanction Turkey for purchasing Russia’s S-400 missile defense system that could expose U.S. military technology to Russian intelligence. During a private meeting with Senate Republicans,Trump asked for “flexibility” and argued against retaliatingafter coming under pressure from Erdogan.

It was around the same time Trump met with Erdogan that Erdoğan’s bodyguards assaulted peaceful protesters on the streets of Washington with no punishment. Then on March 23, 2018, two days before high level meetings between Secretary Tillerson and Erdogan in Ankara, the Justice Department announced it had dropped all charges against 11 of the 15 members.