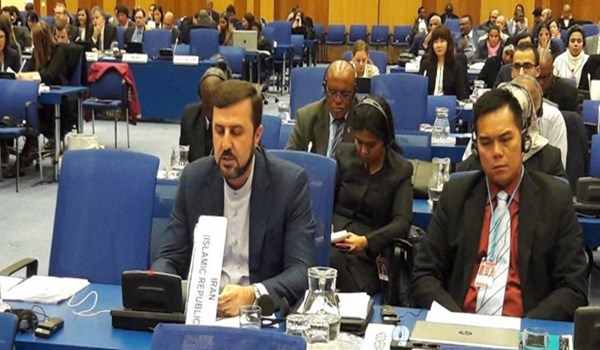 FNA – Iranian Ambassador and Permanent Representative to the International Organizations Kazzem Qaribabadi said that the new report of the International Atomic Energy Agency (IAEA) on his country’s nuclear activities proves that Tehran is still abiding by the IAEA’s rules and offering full access to IAEA inspectors despite scaling down its commitments under the nuclear deal.

Speaking to reporters on Monday after the release of the IAEA’s latest report on Iran’s nuclear activities, Qaribabadi, said, the report “shows that the Agency still has full access in Iran, and despite Iran’s reductions to its JCPOA commitments for creating a relative balance between its rights and responsibilities, the IAEA is still able to carry out its verification of both the implementation and suspension of some parts of Iran’s commitments”.

He referred to the nuclear deal of 2015, between Iran and five permanent members of the United Nations’ Security Council—Russia, France, the UK, the US and China—plus Germany, as the Joint Comprehensive Plan of Action (JCPOA).

“From the moment the Agency notified Iran that it has some questions about a certain location, Iran agreed to a have a positive interaction with the IAEA in order to clarify the situation and address the relevant questions,” he went on to add.

“Iran gave the necessary access to the Agency in a fully cooperative and transparent manner,” Qaribabadi stressed.

Interaction between Iran and the IAEA on this issue is ongoing, he said, adding, “Any attempt to make prejudiced judgments and hasty and crude evaluations will be only interpreted as acts to deviate the course of this issue for political purposes.”

“While the two sides are cooperating to resolve the issue, political motives must not be allowed to take advantage of the situation and blow it out of proportion,” he added.

On a Monday report, the IAEA confirmed that Iran has begun enriching uranium at Fordow nuclear site, adding that Tehran’s enriched uranium stockpile has continued to grow.

The measure was part of Iran’s 4th step to reduce commitments to the JCPOA following the US’ unilateral withdrawal from the agreement, and the European sides’ failure to safeguard Iran’s economic interests in the face of US sanctions.

Tehran has rowed back on its nuclear commitments 4 times, reiterating that the retaliatory measures are fully in compliance with articles 26 and 36 of the 2015 deal.

Iran says its reciprocal measures will be reversible as soon as Europe finds practical ways to shield the Iranian economy from unilateral US sanctions which were imposed last year when President Donald Trump withdrew from the 2015 nuclear deal.

Iranian Government Spokesman Ali Rabiyee said in September that his country was determined to take the fourth step to modify its nuclear deal undertakings unless the Europeans do their obligations under the JCPOA.