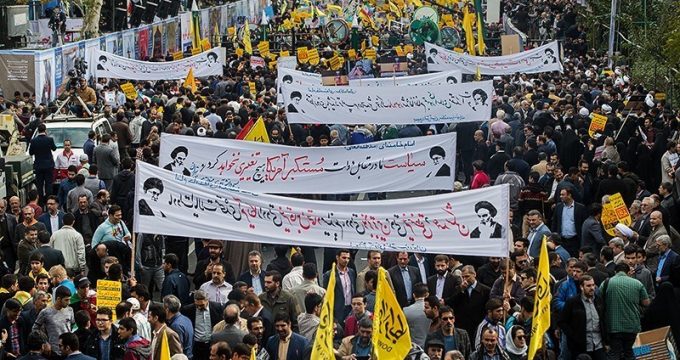 Tasnim – The Iranian people, mostly students, took part in nationwide rallies on Monday to mark the anniversary of the 1979 takeover of the US embassy in Tehran and condemn the US policies against the Islamic Republic.

In Tehran, demonstrators marked the anniversary of the landmark move at the venue of the former US embassy, which is known by Iranians as the “Den of Espionage”.

Ralliers also chanted slogans against the US, the Israeli regime and arrogant powers plotting against Iran.

In November 2018, the US government decided to re-impose what it calls crippling sanctions on Iran on the anniversary of the embassy takeover.

In May 2018, US President Donald Trump had pulled his country out of the nuclear deal known as the Joint Comprehensive Plan of Action (JCPOA), which was achieved in Vienna in 2015 after years of negotiations among Iran and the Group 5+1 (Russia, China, the US, Britain, France and Germany).

In remarks on Sunday, Leader of the Islamic Revolution Ayatollah Seyed Ali Khamenei said the dispute between Tehran and Washington has its roots in the 1953 coup led by the US and UK intelligence agencies against the country.

“The Americans distort history and pretend that the Iran-US disputes stem from the takeover of the US embassy. No! It goes back to the 1953 coup d’état, when the US overthrew a national government – which, of course, had made the mistake of trusting the United States – and established its corrupt and puppet government in Iran,” the Leader said in a gathering of students.