RT – A Russian bird conservation group has discovered a sudden hole in their budget after one of the eagles they were tracking started bombarding them with hundreds of expensive text messages from Iran.

Roaming is one big headache when you travel a lot, and raptors can get burned by it just as easily as the bipeds that created mobile phones. Just ask the Russian Raptor Research and Conservation Network (RRRCN), an environmental group whose eagle tracking budget was surprisingly drained by one particularly sneaky bird of prey.

The network studies the migration routes of various birds, including the endangered steppe eagle. They do so by putting solar-powered GPS trackers on their subjects. The device records the coordinates of the birds and dumps the data via text messages through a regular mobile network when it’s available. The conservationists then check the routes against potential threats like high-voltage power lines or poison baits deployed for pest control and try to find ways to avoid them.

Several of more than a dozen eagles tracked by the RRRCN this year spent the summer in Kazakhstan in desolate places with no mobile coverage. The scientists expected them to take one of the usual routes that would bring them within reach of a cell tower, but one particular bird named Min surprised them in the most financially devastating way.

Min flew away from mobile networks all the way to Iran, and once there, texts with the coordinates recorded over the past several months were dumped. The problem is that each message sent from Iran costs a lot, and four are needed for each day of tracking. 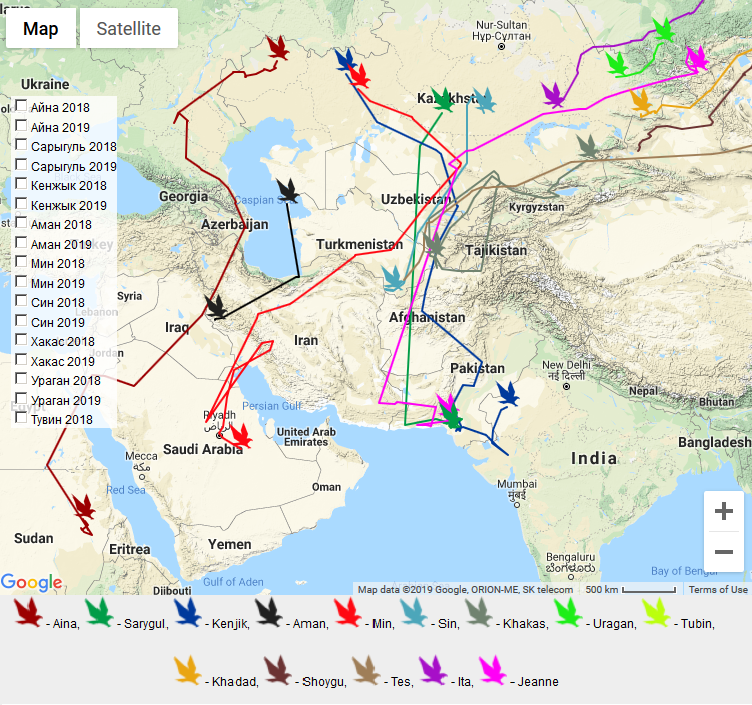 “Why couldn’t she do as the smart girl Aina!?” ornithologist Elena Schneider wrote on her Telegram account. “Aina took time to visit Russia before flying to Iran, Iraq, Saudi Arabia, and Egypt. Her zillions of text messages with summer locations in western Kazakhstan cost us two rubles apiece!”

That is about three US cents – a bargain compared to what the conservationists planned. The usual cost of messages in Kazakhstan is about 23 cents. Each of those that the RRRCN received from Iran drained their coffers by about 77 cents.

The Russian scientists launched a campaign to compensate for Min’s misadventure through crowdfunding, saying otherwise their grant money would be fully depleted 10 weeks early.

Luckily for the ornithologists, their call for help didn’t fall on deaf ears once the story reached the Russian media. As of Friday, donors have sent over $1,500 to the eagle’s collective mobile account, according to Igor Karyakin, a fellow raptor conservationist. That was enough to cover the bank loan that the team had to take as a stopgap measure.

“People are continuing to send money. Our hope is that this funding will keep the tracking project afloat until at least early summer, when the eagles come back to Kazakhstan and Russia, where text messages are not so damn expensive,” he wrote on Facebook.“

To everyone who supported us, thank you so much,” he added.

Meanwhile, the winged scourge of the budget has since moved on and reached Saudi Arabia, according to GPS data.