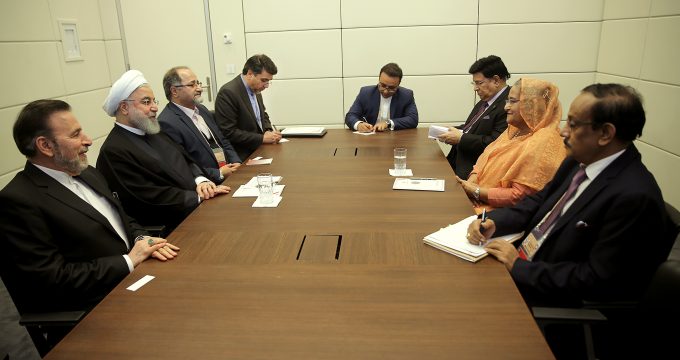 President.ir – President called on all Islamic countries to unity and putting disagreements aside, saying, “Islamic countries must be united and integrated like a family, and settle their discords, because these discords are only to the benefit of the United States”.

Speaking in a meeting with the Prime Minister of Bangladesh Sheikh Hasina Wazed on Friday on the sidelines of the 18th Summit of Heads of State and Governments of the Non-Aligned Movement (NAM) in Baku, President Hassan Rouhani said, “If Islamic countries get united, no country, even the US, can create problems for them”.

He said that the problems in the region are the result of foreigners’ interference and referred to the war in Yemen and the killing of Yemenis, saying, “Iran is doing whatever it can to settle the issues that have caused discord in the region through dialogue”.

“We are willing to deepen bilateral, regional and international Tehran-Dhaka relations,” said Rouhani, stating that Bangladesh is a great Islamic country and Iran’s friend.

Expressing satisfaction over Bangladesh’ economic development, which is the result of precise planning, he said, “Iran is ready to develop its economic relations with Bangladesh, especially in the field of energy”.

On Bangladesh’ hosing of Rohingya people and said that Iran is ready to help the country in this regard.

At the same meeting, the Prime Minister of Bangladesh referred to the common points and deep bonds between the two nations, saying that Bangladesh is willing to deepen ties with all countries, especially the friendly and Muslim nation of Iran.

Criticising the weapon of sanction against countries, she said, “I cannot understand why the United States thinks that it can impose sanctions on any country they want and stand against nations”.

She went on to state that Bangladesh’ motto in foreign policy is ‘friendship with everyone and animosity with no one’, adding, “Bangladesh is a small country in terms of area, but has a big population and it has been able to make good economic progress”.

The Prime Minister of Bangladesh also reported on the latest conditions of displaced Myanmar Muslims and said that her country is negotiating with the government of Myanmar for the return of Rohingya Muslims.