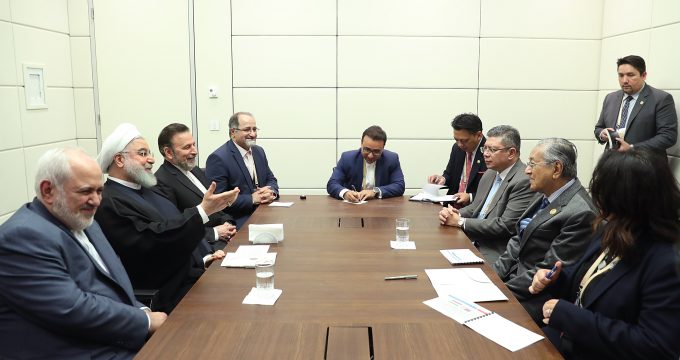 President.ir – President Rouhani had a meeting with the Prime Minister of Malaysia and stressed that Iran is willing to develop its relations with Malaysia in all fields of mutual interest, expressing hope that these relations develop sooner.

Speaking in a meeting with the Prime Minister of Malaysia Mahathir Bin Mohamad on Friday on the sidelines of the 18th Summit of Heads of State and Governments of the Non-Aligned Movement (NAM) in Baku, President Hassan Rouhani stressed, “Your Excellency’s efforts for the development of Malaysia has always been praised by elites, including Iranian elites”.

The president said that Iran is keen to repeat the successful experience of preferential tariffs for developing common commercial relations with Malaysia, adding, “Mutual investment should also be on the agenda of developing economic relations between Iran and Malaysia”.

Dr Rouhani said that the US pressure must not overwhelm major nations, including Iran and Malaysia, adding, “Iran had some difficulties over the past year due to US pressure, but we have successfully passed this phase with planning and resistance, and economic indices reflect this fact”.

The President said, “Our people have shown with their resistance that they do not surrender to America’s pressure”.

Referring to Iran’s interest for developing its academic and technological relations with Malaysia, Dr Rouhani said, “The two countries have made good progress in different areas and can help each other by exchanging experience”.

“We are all members of the Islamic Ummah and there is no difference between the Islamic branches,” he said, stating that having different branches in the Muslim world should not cause divisions and that we must unite against common enemies”.

At the same meeting, the Prime Minister of Malaysia said, “The US sanctions are not only against Iran but also against other countries, including Malaysia and we should seek to arrange for the development of cooperation”.

He added, “I always consider myself as Iran’s friend and Iran’s advancements in new technologies and sciences are amazing and at the same time make me happy”.

“Malaysia is impressed by the resistance of the Iranian government and nation against US pressure because you were well able to overcome US pressure and this resistance is commendable,” he said.

“Malaysia and Iran, as two Muslim countries, can make great progress by using their scientific and economic capacities and contribute to Muslims’ progress,” he continued.