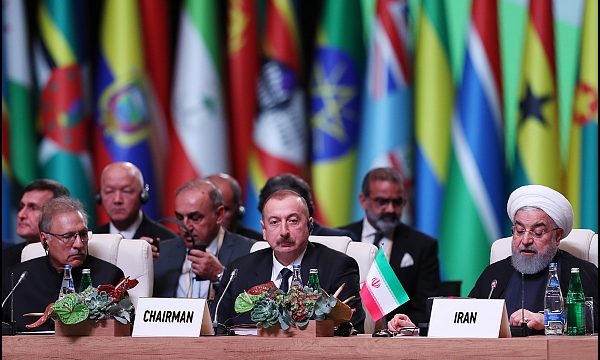 NAM capable of neutralizing impact of US sanctions: Iran president

“America’s domination over the international monetary system has encouraged the United States in the past several decades and particularly in recent years to misuse dollar regularly to put political pressure on independent states, most of which NAM members, enforce various sanctions and limit access to international monetary systems,” Rouhani said in an address to the 18th Summit of Heads of State and Governments of the NAM in Baku on Friday.

He added that such US measures are in direct violation of the “legitimate freedom and rights of independent nations” and stressed that the NAM countries “can take important steps to neutralize the impact of such tools.”

Rouhani noted that international commitment to the requirements of economic sustainability, the expansion of trade ties on the basis of bilateral and multilateral monetary treaties, employment of independent and alternative initiatives on banking services and increased use of cryptocurrencies are among ways to reach that end.

“Of course, all of this should be accomplished in line with upholding international anti-money laundering and terrorism financing rules,” the Iranian president said, adding that many NAM member countries, including Iran, have placed this important issue on their agenda.

Pointing to current conflicts in various regions and the violation of the national sovereignty of independent countries in different forms, Rouhani said the world is “rapidly transiting to multilateralism.”

“Today the US is employing oppressive economic tools in order to impose its illegitimate political goals on independent nations out of desperation in such outrageous and arrogant ways considered to be economic terrorism,” the Iranian chief executive pointed out.

He said the Non-Aligned Movement, which represents more than two thirds of the United Nations member states, has the potential to “be the pioneer on behalf of its members and the human society in finding solutions for the current global problems and within the framework of law abiding, fulfillment of international commitments, moderation and prevention of violence and extremism.”

In a meeting with UN Secretary General Antonio Guterres on the sidelines of the 74th session of the General Assembly in New York in September, Rouhani slammed the United Nations for keeping mum on the crimes the US has been committing against the Iranian nation through an economic terrorism campaign, calling on the world body to break the silence and shoulder its responsibilities.

Referring to Washington’s harsh campaign of economic pressure and sanctions against the Islamic Republic, the president said “an aggressor government is committing all these crimes against an entire nation, while the UN has remained tight-lipped.” He added that this “shame will remain in history.”

Elsewhere in his speech, the Iranian president highlighted the ability of the movement to play an effective role in securing the interests of its members proportionate with the requirements of the new world.

“With the collapse of the bipolar system in international arena, the United States tried to impose on the world a unipolar and hegemonic order under the slogan of the new global system with reliance on its military, economic and media power.”

However, he said, the NAM states have demonstrated their will to withstand unilateralism in international system, stressing, “The main tools in the hands of the US to impose unilateralism turned actually against it.”

Rouhani went on to say that the US staged “extensive and destructive wars” in different parts of the world, particularly in West Asia, in order to impose its domination.

These wars have inflicted hundreds of thousands of casualties and thousands of billions of dollars’ worth of damage on regional nations and fueled the blaze of sectarianism, extremism and terrorism in the region and the world, he added.

“Notwithstanding, the failure of aggressors in realizing their goals in the occupied countries caused the breakdown of the military and political hegemony of the United States in the international arena and boosted the self-confidence of independent states to pursue their rights and interests,” the Iranian president stated.

“The drastic reduction in public confidence in the US political establishment, parties and ruling elite has finally resulted in the emergence of people in politics whose policies have marked the beginning of the end of US hegemony and unilateralism.”

Rouhani emphasized that the NAM states are blessed with a big population, vast area of land and territory and votes in international organizations, adding the movement can find a new pole of power in the multipolar world of future.

“For this to happen, we need to understand the new realities of the region and the world and utilize new tools and facilities of the world today,” he said.

Rouhani reiterated that the Islamic Republic, like in the past, would spare no efforts for the further success of the NAM and its sublime goals.