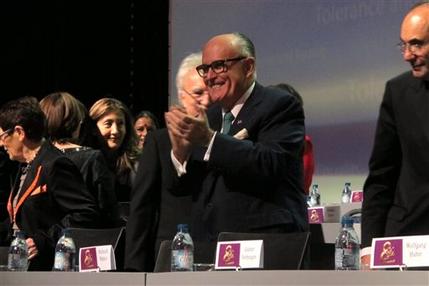 Mukasey wasn’t alone. Joining him at the meeting was another high-profile American political figure: Rudy Giuliani.

For nearly a decade, the former law partners have pushed the agenda of the MEK, giving paid speeches and writing newspaper op-eds expressing support for a group linked to the deaths of six Americans in the 1970s.

But it wasn’t until late last month that Mukasey registered as a foreign agent lobbying pro bono for MEK’s political arm. Giuliani still hasn’t, raising the possibility that the Justice Department could target him in an illegal lobbying probe, experts say.

“This is the kind of scenario that very commonly leads them to launch an investigation,” said Josh Rosenstein, a Washington D.C.-based lawyer who advises clients on compliance with federal lobbying laws.

If Giuliani and Mukasey were “working together or in parallel,” Rosenstein added, “then it’s a huge problem for Giuliani.”

Giuliani’s overseas dealings, primarily in the Ukraine, are under fresh scrutiny after two of his associates were charged last week in a scheme to funnel foreign money to U.S. politicians.

The New York Times has reported Guiliani’s business dealings are under federal investigation and prosecutors may be looking at his exposure for failing to file as a foreign agent.

Legal experts say Giuliani’s work on behalf of the MEK and its political arm, the National Council of Resistance of Iran, also raises questions about whether he may have run afoul of the Foreign Agents Registration Act, or FARA. The law requires American citizens to disclose to the Justice Department any lobbying or public relations work on behalf of a foreign entity, regardless of whether they’re paid for the representation.

A review of the group’s government filings shows that Giuliani met with MEK officials at least once every year since 2014. A range of issues were discussed, including “Iran’s nuclear weapons as well as Iran’s terrorism in the region, including Iraq and Syria” in 2014, the plight of Iranian dissidents living in Iraq in 2015, and the protests in Iran in 2018.

During that period, he’s appeared at MEK-related events in Poland, Albania, Paris and Washington. FARA experts say Giuliani’s speech in Washington in May 2018 and U.S.-based writings in support of the group are particularly problematic.

He said the Justice Department will likely try to “develop facts to determine whether these efforts to influence public opinion in the U.S. were at the request or direction of MEK, a foreign interest.”

“This is a particularly unusual situation because Mr. Giuliani was acting as the President’s counsel, all while acting in ways that suggest he was simultaneously representing certain foreign interests,” Sanderson said.

In an interview with NBC News, Giuliani said he has no reason to register as a foreign agent because, unlike Mukasey, he’s not planning to speak to U.S. government officials about the MEK.

“I’m not doing what he’s doing,” Giuliani said. “He’s not registering for any previous activity. He’s registering because he’s asking for a specific meeting with the government.”

Giuliani would not elaborate on the reason for the meeting. Mukasey declined comment.

Representatives for the group’s political arm did not return requests for comment.

Formed in the 1960s as a Marxist-Islamist movement, the MEK has a bloody history.

The group, whose name translates as “People’s Holy Warriors of Iran,” is accused of killing six Americans prior to the 1979 Iranian revolution and assassinating Iranian diplomats in the subsequent years.

A longtime ally of the late Iraqi dictator Saddam Hussein, the MEK was placed on the State Department’s U.S. terror blacklist in 1997. The group enlisted an A-list cast of former American political and law enforcement leaders as part of its effort to remove itself from the terrorist list and enhance its reputation in the West.

The strategy worked. In 2012, Secretary of State Hillary Clinton announced a decision to remove the group from the State Department’s list of designated terrorist organizations.

Daniel Benjamin, a State Department counterterrorism coordinator from 2009 to 2012, has focused extensively on the network of American politicians who have been paid by MEK, including Giuliani and Mukasey.

“I found it pretty distasteful that they were shilling for this group even if it was delisted,” said Benjamin, now a professor at Dartmouth College. “This is a group that has American blood on its hands, and it’s never owned up to that.

“Look at those who have gone on their gravy train and then go to their events and say MEK is going to bring democracy and peace to Iran,” Benjamin said. “Basically these guys bring aboard their pals. Especially among the hardest line anti-Iran folks, this is the place to go. Though plenty of people become much more hard line once their pockets are filled with MEK money.”

“The big question,” Benjamin added, “is where does all this money come from?”

Karim Sadjadpour, an Iran expert with the Carnegie Endowment for International Peace, described the organization as a fringe group with mysterious benefactors that garners scant support in its home country.

“Their population in Iran hovers between negligible and nill,” Sadjadpour said.

In speeches and media interviews, Giuliani and the others have insisted the MEK is now a democratic-minded opposition group committed to overturning the mullah-led government in Tehran. They say their support for group is also based on humanitarian motives — to ensure the safety of the Iranian dissidents living in Iraq where they face the threat of attacks.

Giuliani’s MEK advocacy dates back to at least 2010. In December of that year, he and Mukasey were among a group of prominent Republicans who traveled to a rally in Paris where they called on the Obama administration to remove MEK from the U.S. list of foreign terrorist organizations.

“For your organization to be described as a terrorist organization is just really a disgrace,” Giuliani declared before a crowd of Iranian exiles, according to an article in the Washington Post.

Mukasey urged the White House to offer “all possible technical and covert support to those fighting to end oppression in Iran.” “What it has done and what it is doing is nothing less than an embarrassment,” he told the crowd, according to The Post.

The following year, Giuliani and Mukasey co-wrote an op-ed in the National Review with two other MEK supporters defending the organization.

In the 2011 piece, headlined “MEK is not a terrorist group,” Giuliani and the others argued against suggestions that the authors were providing material support to a terror group. The MEK has “provided valuable intelligence to the United States to Iranian nuclear plans,” they wrote.

In his FARA filing, dated Sept. 26, Mukasey wrote that he’s not being compensated for his MEK advocacy.

Sanderson, the defense lawyer who focuses on government lobbying, said the listing of that date could pose problems for Mukasey if he started doing lobbying work for MEK before then.

“Filing a late registration, especially if you’re not accurate in your description, could result in charges,” Sanderson said.

But Sanderson added that filing late is still better than not filing at all. “If you approach the government and proactively say, ‘I’m registering,’ even if it’s late, you’re in a much better position than if the government comes to your door.”

Giuliani would not say how much the group pays him for his appearances. He said there’s no reason why the Justice Department would target him for activities that dozens of other former U.S. politicians and military figures are participating in.

In an interview with NBC News’ Andrea Mitchell in Poland this past February, Giuliani said he worked to get the MEK off the terror list because “there was no evidence of any kind of terrorist activity for over 20 years, if any, and they were basically revolutionaries who overthrew the shah.”

“They believe in democracy, in human rights, rights of women,” Giuliani said.

Mukasey told the New York Times in 2011 that he had been paid his standard speaking fee — $15,000 to $20,000, according to the Web site of his speakers’ agency — to deliver talks at MEK-related events.

He insisted that his decision to advocate on behalf of the group was not driven by money. “There’s no way I would compromise my standing by expressing views I don’t believe in,” Mukasey told The Times.

Federal prosecutors have brought few FARA cases over the years. But the law garnered renewed attention during the special counsel’s investigation of Russian election interference.

Giuliani’s contacts with the MEK extended into this past summer. In July, he traveled to Albania to meet with the group’s president, Maryam Rajavi.

An article from the MEK’s official website said Giuliani “emphasized that America stands on the side of the Iranian people and supports their struggle for freedom.”