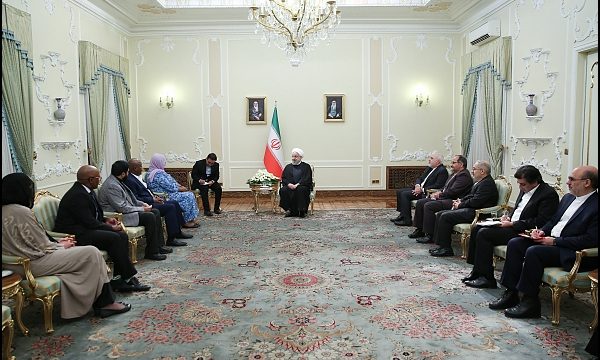 Tasnim – Iran’s President Hassan Rouhani deplored the US’ sanctions against the Islamic Republic and called on the friendly nations, including South Africa, to take “a more decisive stance” against such cruel moves by Washington.

Speaking at a Wednesday meeting with South African Minister of International Relations and Cooperation Naledi Pandor in Tehran, Rouhani decried Washington’s economic war against the Iranian nation following its unlawful withdrawal from the 2015 nuclear deal, officially known as the Joint Comprehensive Plan of Action (JCPOA).

He further called on the international community to stand up to the US actions, which he said are to the detriment of all, including the United States itself.

“We hope all our friends around the world, including South Africa, will take a more decisive stance against the US’ illegal and inhumane actions towards the Iranian nation which even include food and medicine sanctions,” Rouhani said.

Elsewhere, Rouhani stressed the need for global consultations on war-stricken and displaced people of the world, especially the oppressed nations of Palestine and Yemen.

The South African minister, for her part, praised Iran for remaining committed to the JCPOA, and urged the US to return to the agreement and end the economic sanctions on the country.