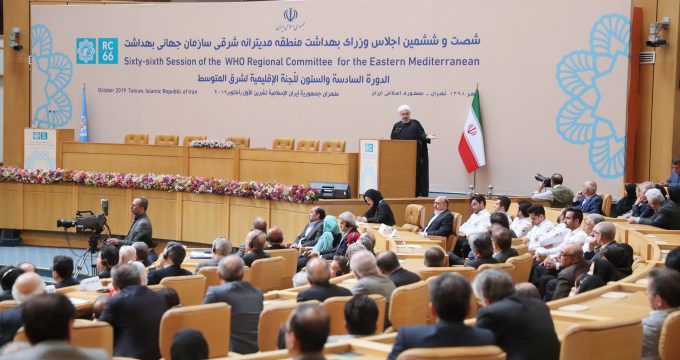 Iranians’ life expectancy increased 6 months a year in the past 40 years: President Rouhani

President.ir – President mentioned the government’s especial attention to health and environment, describing it a great honour, and said, “In the past 40 years, Iranian people’s life expectancy has increased by 6 months every year”.

Speaking on Tuesday at the 66th Session of the WHO Regional Committee for the Eastern Mediterranean in Tehran, Dr Hassan Rouhani said, “We are proud of Iranian doctors’ self-sacrifice and devotion, which brings calmness to the people”.

“It is an honour for the eleventh and twelfth governments to have been called the Government of Health and Environment,” he added.

The President described saving 14 million Iranians from salt storm one of the great achievements of the government, saying, “Restoration of Lake Urmia was the government’s first decision since it took office, and today, we can be sure about the lake’s restoration. If this step was not taken, there would be no city named Tabriz today”.

Dr Rouhani said that if it were not for the 11th and 12th governments’ efforts for clean air and the health of the Iranian people, petrochemical petrol would send millions of people to hospitals.

He added, “Today, standard Euro-5 petrol and diesel is being used in all major cities in Iran. Preventing air pollution means ensuring the health of the Iranian people”.

“The government measures to reduce patients’ spending and payments in hospitals by up to 10 per cent in cities and 5 per cent in villages have been unprecedented in Iran’s history,” he said.

Dr Rouhani also went on to say, “People’s calmness and alleviating their pain under the Healthcare Reform Plan is an honour for the entire Iranian medical staff”.

Dr Rouhani emphasised that our knowledge in medicine, pharmacy, disease diagnosis and high-level education of physicians are not the only sources of pride, saying, “The Islamic Republic of Iran is proud of the dedication and self-sacrifice of its physicians, nurses and medical staff, and the medical ethics is above science and technology in our country”.

“Giving confidence to people is the first effect of a doctor and health begins here, together with healthy nutrition,” said Dr Rouhani, adding, “There is no malnutrition in our country”.

He continued, “The fact that 10 villages are connected to the national gas network daily and 30 villages are linked to the safe drinking water network each week means that people have access to healthy water, enough food, clean fuel, and relatively clean air, and they trust doctors”.

Dr Rouhani reiterated, “If a nation is in peace, the first important step for health has been taken, and there is this confidence in our nation today”.

“Employment plays an important role in people’s health because an unemployed person who is always thinking about his or her livelihood that is barely available to him cannot be healthy,” he continued.

The President also said, “Despite all the problems and unfair sanctions imposed by the enemies on the Iranian nation, this summer we had 843,000 net employment, which is an honour for the Islamic Republic”.

Referring to the United States’ crimes against the great Iranian nation, he said, “The US withdrew from the Joint Comprehensive Plan of Action (JCPOA), which was an international agreement, without any reason and under the pressures from domestic hardliners, the Zionist Regime and Saudi Arabia”.

“Withdrawing from an international agreement is a shame for a country. The bigger shame is that they have violated an agreement that had been endorsed by the United Nations. The even biggest shame for the US is that they have imposed sanctions on foodstuff and medicine needed by the people of Iran,” he continued.

The President of the Islamic Republic of Iran also went on to say, “US has committed a crime against humanity and economic terrorism by imposing sanctions on the Iranian nation. Of course, this economic terrorism does not mean that the Iranian nation have surrendered, because our scientists, researchers, entrepreneurs and producers have stepped up their efforts under these unprecedented economic pressures and unjust sanctions, which is leading us towards full self-sufficiency today”.

Dr Rouhani said that today, more than 95 per cent of the country’s medicines are manufactured domestically, adding, “Of course, our friends did not forget us. Although they respect the United States in words, they help us in practice”.

The President added, “We appreciate our friends who were with us in these difficult times. We are grateful to our committed physicians for their efforts to prevent people’s health from being compromised and not letting any queues form for medicine in the country”.

Stating that the 83 million Iranians will not forget the US’ crime, Dr Rouhani said, “The US will be, and is, the loser in the world of politics, ethics and humanity”.

“After 18 months of unprecedented economic pressure, we are seeing a decline in inflation rate and positive economic growth in the country,” the president said.

He continued, “Our stock market has grown 71% and we have 72% growth in the OTC market. The Iranian people did not yield to the US pressure and sanctions and they stood and resisted with courage and vitality”.

Dr Rouhani continued: “The fact that under the current economic sanctions and pressures 3.5 million pilgrims travel to Iraq and Karbala indicates the physical and spiritual vitality of the Iranian nation”.

“We extend the hand of brotherhood and friendship to all our neighbours,” said Dr Rouhani, saying that the friendly relations of neighbours with Iran means that America and the Zionists are defeated.

The President noted, “For the past seven to eight years, our region has faced a savage terrorism, and the most vicious terrorists have occupied parts of our region. They killed innocent people in Syria, destroyed Iraq and beheaded people, oppressed the people in Pakistan and Afghanistan, and killed defenceless people in the beloved Yemen”.

Dr Rouhani said that war and terrorism are important factors in disrupting society’s health, saying, “Ensuring health under bombing is impossible or very difficult. Occupation and military attack on Yemen, Syria, Iraq and Afghanistan mean that the people in these areas will face many problems and their health will be threatened”.

“We have responded to the Damascus government’s request on the first day,” he said, stressing that Iran did not forget its neighbours in difficult conditions.

He added, “We rescued the Syrian occupied cities, such as Aleppo and Hama, from the savage terrorists, and came to the help of the Iraqi government and people to confront those who wanted to destroy Iraqi cities to ashes, pushing the terrorists out and constantly providing health care”.

Dr Rouhani emphasised that Iran is with the oppressed Palestinians who are being bombed and oppressed by the Zionist Regime every day, adding, “We are also with the Yemeni people and help the people in providing food and medicine, and this is an honour for us”.

The President reiterated, “If we want to see health and life expectancy in the region, and to eradicate disasters that threaten people’s health, we must speak out loud and stand in front of those who set fires in the region, and help the wounded”.

Dr Rouhani said, “Iran is still a sanctuary for the region’s patients and our Shiraz, Tabriz, Mashhad and other cities are a place where people from neighbouring countries come for treatment and we are proud of this”.