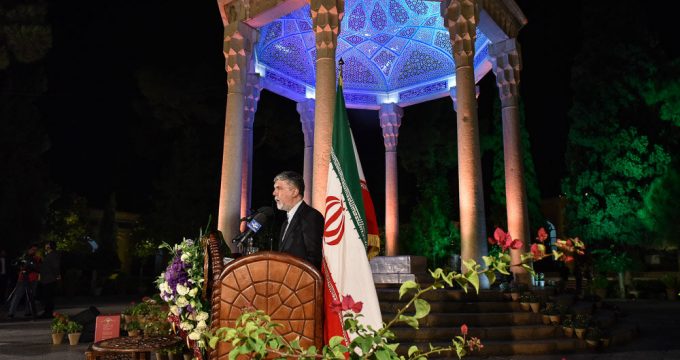 Hafez as fresh as flower in public memory: Minister

IRNA – Minister of Culture and Islamic Guidance Abbas Salehi said on Friday that Hafez is the most popular poet who is as fresh as a spring flower in the public memory.

Addressing a ceremony commemorating Hafez in Shiraz on Friday, he added that some section of Hafez’ eternality lies in the fact that the Iranian society does not feel it recites poetry with him; rather it feels composes poem with him, as it is engaged in the development of the meaning, and that’s where Hafez flows in the Iranians’ poetic spirit.

“Hafez can be viewed from different angles, each of which can open up new perspectives,” he said.

Despite lapse of six and half a century since his time, Hafez still continues to remain in the memories of the people, he said, noting that Hafez is always there, including the major cultural ceremonies such as Nowruz traditions and Yalda rituals.

“It seems that Hafez helps us in the field of self-consciousness, as he assists us to see ourselves in his mirror and discover ourselves,” he said, adding that this is where one can forge a communicative line with Hafez through which they can create a path inward.

Khaje Shams-ud-Din Muhammad Hafez Shirazi (1315-1390), known by his pen name Hafez (literally meaning ‘memorizer’ or ‘keeper’), was a Persian poet whose works are regarded as a pinnacle of Persian literature. The collection of his sonnets, known as Divan-e Hafez is very popular in the Persian-speaking world. His life and poems have been the subject of much analysis, commentary and interpretation, influencing post-14th century Persian writing more than any other author.

October 12 has been designated as Day of Hafez in Iran’s calander year and ceremonies are held every year to commemorate the great Iranian poet.