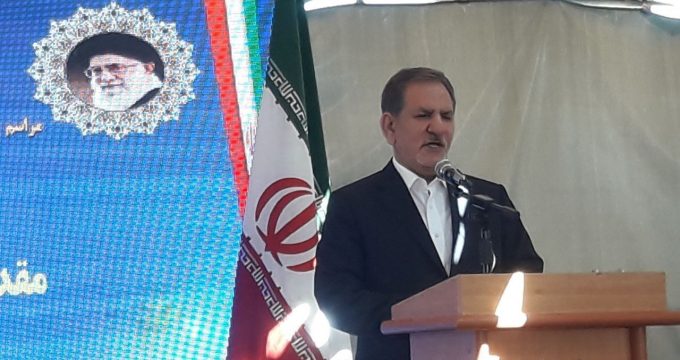 IRNA – Iranian First Vice President Eshaq Jahangiri said on Monday that thanks to solidarity of the nation and government, the cruel sanctions imposed by the World Arrogance leaders have been defeated.

He made the remarks in a ceremony to inaugurate a modern drinking water network in Birjand.

Jahangiri said that despite the fact that the US has imposed economic war against Iranians, Iran has turned out to become a big workshop for developing and construction.

Iran has now become the hub of electricity in the region, he said, adding that its income is spent on the development projects.

Earlier, Jahangiri said that the US seeks collapse of the Iranian Government by the strategy of “maximum pressure”.

He said that the US was a signatory to the Joint Comprehensive Plan of Action endorsed by the United Nations Security Council Resolution 2231 and then unilaterally pulled out of it, adding that the US started an unequal war in March 2018, when it restored the sanctions.

Iran, on one side, the five permanent members of the United Nations Security Council plus Germany, on the other side, signed an agreement in 2015, according to which Iran would limit its nuclear program for a limited time and in return enjoy a relief from all the nuclear-related sanctions of the UN and the US.