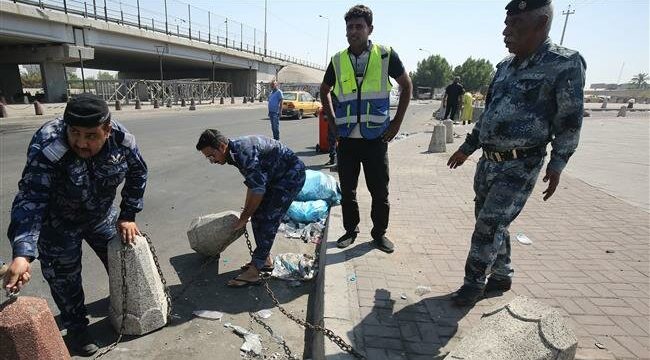 Iraq says all evidence points to ‘malicious hands’ in protests

Press TV – Iraqi officials say there are “malicious hands” behind the killing of both protesters and security forces during the recent spate of unrest in Baghdad and some other cities.

Interior Ministry spokesman Saad Maan confirmed for the first time on Sunday that 104 people had been killed, including eight security officers, and more than 6,000 wounded in the protests.

Maan said the ministry was working with other government institutions to find out who was behind the killings. According to medical sources, the majority of protesters killed were struck by bullets.

The protests began last Tuesday, with demonstrators calling for better living conditions. The rallies soon turned into riots as some protesters started vandalizing public properties and attempted to enter the Green Zone in the capital Baghdad — which houses government offices and foreign diplomatic missions.

On Saturday night, armed elements and violent rioters attempted to take over local TV stations in Baghdad after the government removed a days-long curfew.

According to the spokesman, most of those killed on Friday had been shot in the head or heart, a sign that skilled snipers had carried out the killings.

Officials say there are attempts at “sedition” from “unidentified snipers” who shot police and protesters indiscriminately.

“We can’t accept the continuation of the situation like this,” Prime Minister Adil Abdul-Mahdi told his Cabinet late Saturday. “We hear of snipers, firebombs, burning a policeman, a citizen.”

Parliament speaker Mohamed al-Halbousi echoed the premier’s remarks, saying that “infiltrators” were wreaking havoc. He said the parliament had formed a committee to investigate the matter.

Iraqi security officials have made it clear that their forces would not use lethal force against protesters unless their lives were in danger.

On Sunday night, at least 13 people were killed in clashes with security forces in a district of capital, where the military admitted some forces had violated the rules of engagement.

“Excessive force outside the rules of engagement was used and we have begun to hold accountable those commanding officers who carried out these wrong acts,” the military said in a statement.

There are unconfirmed reports that some foreign diplomatic missions are trying to keep the flames of the unrest alive by sending mercenaries into the ranks of protesters to cause more violence.

Lebanese newspaper Al Akhbar reported Saturday that Saudi Arabia’s Embassy in Baghdad had been hiring paid snipers to take out people and guards alike. The report made similar allegations against the US Embassy staff.

There were no immediate official reactions to the claims.

On Sunday, the Iraqi government announced a series of reforms after an “extraordinary” session overnight in response to the sweeping unrest.

The governor of the province of Baghdad, Fallah al-Jazairi, also stepped down and members of the provincial council accepted his resignation.

Confronted by its biggest challenge since coming to power just under a year ago, Abdul-Mahdi’s cabinet issued a decree including 17 planned reforms, such as land distributions and increased welfare stipends for needy families.

Authorities have asked protesters to give them time to implement reform. Grand Ayatollah Ali al-Sistani, the top Shia cleric of Iraq, on Friday urged security forces and protesters to avoid violence.

Iraq declared victory over the Daesh terrorist group at the end of 2017 — after nearly four years of conflict.

The violence comes as millions of Shia pilgrims are preparing to travel to the Iraqi holy cities of Najaf and Karbala to attend Arba’een ceremonies, marking the fortieth day after the martyrdom anniversary of their third Imam, Hussein ibn Ali (AS).

Iraq recently reopened its al-Qa’im border crossing with Syria and accused the occupying regime of Israel of orchestrating a string of recent drone strikes on Iraqi popular mobilization forces.

Tehran-based political analyst Hussein Sheikholeslam said Saturday the unrest is a product of US efforts to weaken “the resistance axis,” which is the key pillar of rising opposition to American and Israeli plans in the Middle East.

Iraqi Popular Mobilization Units (PMU), or Hashd al-Sha’abi, announced Monday that it is ready to help prevent “a coup d’etat or a rebellion” in the wake of the violence.

Faleh al-Fayyad, the PMU head and Iraq’s national security Adviser, told reporters that he wanted to see “the fall of corruption, not the fall of the government.”

He was referring to demands by some protesters for Abdul-Mahdi to step down in order to perform a complete overhaul of the country’s political system.

“We tell the enemies and the conspirators that their efforts have failed,” he said in a press conference. “We will defend the constitution and the government that we have established with our blood and our lives.”

Fayyad said eradicating corruption and achieving economic prosperity is only possible if the government stays in office.

“The government and on top of it the prime minister do their best to complete the transition,” Fayyad said. “In the absence of government security is lost and it is only within this framework that a solution can be reached.”

He also pledged a crushing response to those who perpetrated violence and killed and injured people.

“We know who is behind letting some saboteurs infiltrate the demonstrations,” he said, adding “we have footage and intelligence that we will present when time is appropriate.”

Abdul-Mahdi’s office issued a statement on Monday, saying the prime minister had discussed the situation with US Secretary of State Mike Pompeo.

According to the statement, Abdul-Mahdi told the US top diplomat that the government was in full control and planning to continue taking practical steps to meet people’s demands.