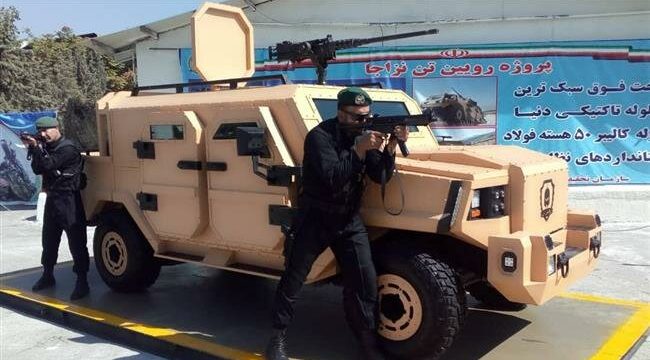 The domestically-manufactured pieces of equipment were officially delivered to the relevant military forces during a ceremony on Thursday in the presence of Brigadier General Mohammad Hossein Dadras, the Army’s second-in-command and Commander of the Iranian Army’s Ground Forces Brigadier General Kioumars Heidari.

During the ceremony, Rouintan, a state-of-the-art bullet-proof personnel carrier was put on display. The lightweight vehicle enjoys high mobility in different battlegrounds.

A network-oriented smart robot dubbed Heidar 1 was also unveiled during the ceremony. The robot is capable of rotating 360 degrees, carrying loads, and detecting objects and obstacles.

The Army also displayed a hand-launched reconnaissance drone, named Farpad, which is equipped with autopilot and can take pictures round the clock.

Speaking at the ceremony, Dadras voiced Iran’s preparedness in countering any threat against the Islamic Republic.

“What we are witnessing today is that the ground forces, with their capabilities, can respond to the enemies’ threats” he said.

He censured the US’s military presence in the West Asia region, saying that Muslims themselves can ensure the region’s security through strengthening their unity.