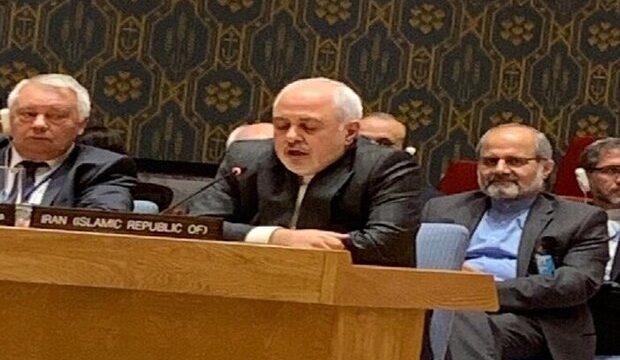 IRNA – Iran’s Foreign Minister’s 9-day visit to New York and his intensive official and informal meetings with international officials amid the US sanctions and severe restrictions on Iran can be described as “breaking the siege on Iranian diplomacy”.

Despite Trump’s unprecedented pressure to restrict the Iranian Foreign Minister’s commutes in New York City, his meetings with a wide range of international counterparts and US political elites showed that these restrictions did not prevent Mohammad Javad Zarif’s effective consultations at this critical international stage.

The Iranian foreign minister not only proceeded his political consultations on the sidelines of the annual United Nations General Assembly summit but also outlined the Tehran Peace Initiative in response to the US and Saudi’s simmering tensions.

Zarif’s negotiations in New York began shortly after his arrival in the city. Meanwhile, the Trump administration has imposed severe restrictions on his commute to reduce the impact of Zarif’s speeches and meetings, such that his radius of commute was limited to the three streets around the UN headquarters, the Iranian Mission and his hotel.

These restrictions made some changes to Zarif’s plans. For example, the Asian Association, which is located outside the radius of limitations, was failed to host the Iranian Foreign Minister this year.

But the remarkable thing was that international officials and dozens of American journalists, experts and political elites eagerly made their way to Zarif’s residence to hear his views on the latest international developments.

Given the tensions of the past months in the Persian Gulf region, these developments were part of the Foreign Minister’s most important meetings with Iraqi, Omani, Qatari and Kuwaiti counterparts.Iranian diplomacy

Yemen war, the security of the Persian Gulf waters and Oman Sea, and Saudi Arabia’s pugnacity policies were the focus of Zarif’s discussions with the foreign ministers of the four countries.

Such meetings had the message that the four Persian Gulf states are opposed to the Saudi-UAE anti-Iran approach.

They also asked Zarif about the Hormuz Peace Initiative for cooperation among the countries of the region and expressed their views on reducing tensions.

Syrian Foreign Minister Walid al-Muallem also had a close meeting with his Iranian counterpart at the United Nations headquarters on Friday. During the meeting, the two sides discussed developments in the region and the latest situation in Syria.

At the end of the meeting, al-Moallem told the IRNA correspondent that Damascus-Tehran relations are stronger than ever, and the strategic partnership between the two countries will vigorously continue.

The Foreign Minister of the Islamic Republic of Iran also met with his European counterparts to discuss the US anti-Iran sanctions and the JCPOA.

During these meetings, the foreign ministers of Austria, Denmark, the UK, France, Poland, the Netherlands, and Finland told Zarif that they are committed to the agreement and called on the Islamic Republic to fully implement the agreement.

Zarif’s answer, however, was that the EU should expect as much of its commitment in the JCPOA vis-à-vis to Iran.

Without Europeans fully adhering to the the JCPOA and compensating for unilateral sanctions imposed by the United States, Iran will take the next steps to reduce its obligations. That was one of the focus of the Finnish Foreign Minister’s talks with his Iranian counterpart on Friday.

“We are one of the defenders of the JCPOA,” Pekka Haavisto, whose country is the European Union’s rotating president, told IRNA. “We are concerned that the United States has withdrawn from this agreement. We are also concerned about Iran’s steps toward getting out of the JCPOA.”

We see the JCPOA as a good basis for bilateral cooperation, Haavisto said. We believe that Europe can really help Iran find a way out of the current crisis. Of course we need to maintain good relations and keep the dialogue going well.

While the Finnish Foreign Minister who holds the rotating EU presidency can summarize the Union’s shaky stance on the US unilateralism and Europe’s commitment to the JCPOA, the Chinese and Russian foreign ministers in New York explicitly spoke the need to counter the US unilateral sanctions.

Although Zarif’s visit to New York was shorter than his previous ones, due to the unprecedented restraint and pressure of the US government, his series of meetings and consultations sent two clear messages to the world.

The numerous meetings of international officials and American political elites with the Foreign Minister of the Islamic Republic of Iran, sanctioned and restricted by the Trump administration, were a clear grimace to the US government’s decision to isolate Iran.

The form of these meetings was nothing but breaking the siege wall that the Trump administration had delineated around Zarif.

But in terms of content, the Iranian Foreign Minister has clearly explained Tehran’s message to international officials and the American elite.

The message was Iran’s determination to oppress American bullying and European silence while simultaneously keeping the diplomatic door open to the West.