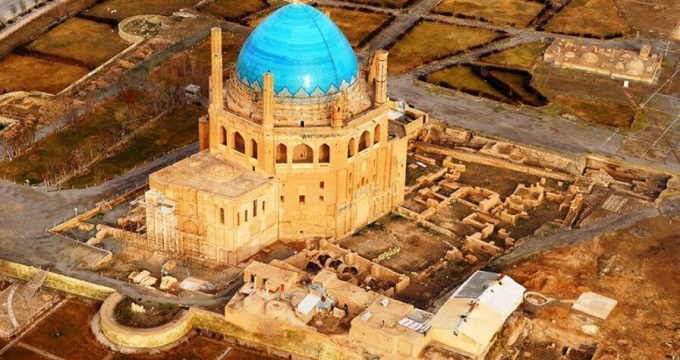 IRNA – Some 2,689 foreign tourists visited the Soltanieh dome on Zanjan neighborhood in the first six months of Iranian year compared to 2,368 tourists in the the same period last year.

Soltaniyeh Dome is the 3rd biggest brick dome in the world and the Mausoleum of Ilkhan Oljaytu highlighted accomplishment of Iranian architecture and is the top three huge historic buildings in the world.

The structure is a very exquisite mosque which is well-known in the world from the viewpoint of architecture, interior design and space. Soltaniyeh Dome.

In north-western Iran’s city of Soltanieh, which was briefly the capital of Persia’s Ilkhanid dynasty (a branch of the Mongol dynasty) during the 14th century, stands the Mausoleum of Oljaytu, its stunning dome covered with turquoise-blue faience tiles. Constructed in 1302-12, the tomb of the eighth Ilkhanid ruler is the main feature remaining from the ancient city; today, it dominates a rural settlement surrounded by the fertile pasture of Soltanieh. The Mausoleum of Oljaytu is recognized as the architectural masterpiece of its period and outstanding achievement in the development of Persian architecture, particularly in its innovative double-shelled dome and interior decoration.

The dome is located 30 km east of Zanjan inside the rampart of the old city of Soltanieh. It is an octagonal building, each side of which is almost 80 meters.