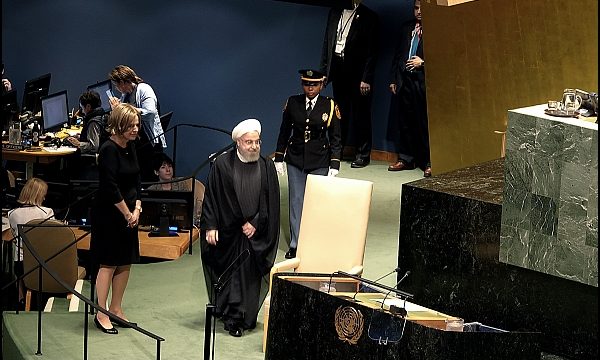 Refusing to talk with Iran is a mistake

Foreign Policy |   Thomas A. Shannon Jr., John B. Bellinger III: Donald Trump should use the U.N. General Assembly as an opportunity to open dialogue with Mohammad Javad Zarif.

In late July, the Trump administration took the unusual step of imposing sanctions on Zarif, freezing whatever assets he might have had in the United States, prohibiting Americans from engaging in transactions with him, and suspending his visa to enter the country. Although the White House made an exception to allow Zarif to attend meetings at the U.N. General Assembly, the administration says it will refuse to speak with him while he’s here.

Sanctioning Iran’s top diplomat is counterproductive—and so is avoiding conversation.

As the Trump administration deploys troops to Saudi Arabia and considers the possible use of military force against Iran in response to attacks earlier this month on Saudi oil facilities, the United States should look to open, not cut off, channels of diplomatic communication with Iran. As U.S. Sen. Rand Paul tweeted when the sanctions on Zarif were announced, “If you sanction diplomats you’ll have less diplomacy.”

Trump administration officials justified sanctioning Zarif, who was Iran’s lead negotiator in the run-up to the 2015 nuclear deal, by asserting that he acts as a propagandist for the Iranian regime. U.S. Treasury Secretary Steven Mnuchin said: “Javad Zarif implements the reckless agenda of Iran’s Supreme Leader, and is the regime’s primary spokesperson around the world.” Then-U.S. National Security Advisor John Bolton used blunter language, calling Zarif a “con man” and a “grifter.” But even if administration officials disagree strongly with Zarif’s message and defense of his country, he still remains Iran’s senior diplomat and designated interlocutor with the United States. The United States would be incensed if other countries sanctioned its secretary of state on similar grounds.

U.S. presidential administrations have a long history of working with foreign diplomats with whom they disagreed. Former Secretary of State Henry Kissinger said of Andrei Gromyko, the Soviet Union’s longtime foreign minister: “as the spokesman of a country that had never prevailed except by raw power … he was obliged to test his mettle in every encounter. … He protected his country in times of turbulence and confusion; he masked its weakness; he advanced its purposes.” The two men were adversaries, but cultivated a sense of mutual respect.

The notion that Zarif is no more than a feckless shill for Iran does not check out.

Anyone who paid close attention to the negotiations that led to the 2015 nuclear deal, from which U.S. President Donald Trump withdrew in May 2018, observed that Zarif handled those complex talks capably. He wields significant influence in the Iranian government. Indeed, the Trump administration, through its strong criticism of that deal and decision to withdraw from it, has in the past offered Zarif backhanded praise. From the Trump administration’s point of view, Zarif bested not only the Obama administration but also British, Chinese, French, German, Russian, and European Union diplomats who participated in the negotiations.

So far, the sanctions imposed on Zarif appear to be largely symbolic. He says he has no property in the United States, and it is unlikely that he would engage in any financial transactions with U.S. nationals.

However, the sanctions also suspend Zarif’s visa to enter the United States, unless the U.S. secretary of state makes a specific exception. Secretary of State Mike Pompeo waived the prohibition this week—but any other decision would likely have violated the U.N. Headquarters Agreement, which the U.S. signed in 1947. Under the agreement, the United States agreed not to impose restrictions on travel to the U.N. by representatives of U.N. members, subject to a congressional reservation that the United States had the right to “safeguard its own security.” Although the United States has in the past denied visas to several Iranian diplomats on the basis of this security reservation, those individuals had been directly involved in the 1979 Iranian takeover of the U.S. Embassy in Tehran. Trump administration officials may dislike what Zarif is saying, but they have offered no evidence that he has been involved in attacks on Americans or otherwise poses a threat to the security of the United States.

Two years later, the United States has a broad agenda of issues to discuss with Iran, including the attacks on Saudi Arabia, Americans unjustly detained by Tehran (an issue on which the authors are advising an American family), nuclear nonproliferation, the security and well-being of Israel and U.S. partners in the Persian Gulf, Tehran’s regional meddling, and secure navigation through the Persian Gulf and the Straits of Hormuz.

The United States cannot resolve this slate of issues through self-isolation and disdain for Iran’s diplomats, even in the face of bitter disagreements. Progress requires engagement with Iran, including with Zarif. It is time for U.S. and Iranian diplomats to get back to work, with the respect and seriousness that the current situation demands.