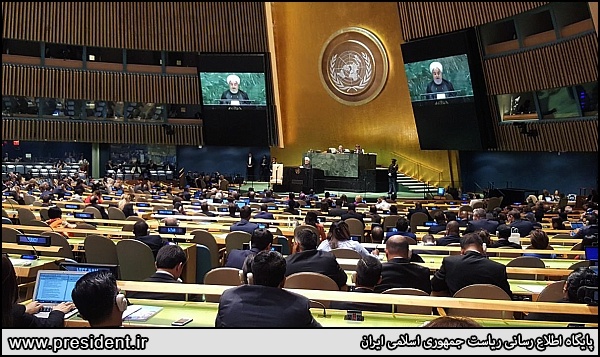 Full remarks made by the Iranian President at the United Nations

Bourse and Bazaar – In the name of God, the Most Compassionate, the Most Merciful

I would like to congratulate your deserved election as the president of the seventy-fourth General Assembly of the United Nations and wish success and good luck for Your Excellency and the honorable Secretary General.

At the outset, I should like to commemorate the freedom-seeking movement of Hossein (PBUH) and pay homage to all the freedom-seekers of the world who do not bow to oppression and aggression and tolerate all the hardship of the struggle for rights, as well as to the spirits of all the oppressed martyrs of terrorist strikes and bombardment in Yemen, Syria, Occupied Palestine, Afghanistan and other countries of the world.

The Middle East is burning in the flames of war, bloodshed, aggression, occupation and religious and sectarian fanaticism and extremism; And under such circumstances, the suppressed people of Palestine are the biggest victim. Discrimination, appropriation of lands, settlement expansions and killings continue to be practiced against the Palestinians.

The US and Zionist imposed plans such as the deal of century, recognizing Beit-ul Moqaddas as the capital of the Zionist regime and the accession of the Syrian Golan to other occupied territories are doomed.

As against the US destructive plans, the Islamic Republic of Iran’s regional and international assistance and cooperation on security and counter-terrorism have been so much decisive. The clear example of such an approach is our cooperation with Russia and Turkey within the Astana format on the Syrian crisis and our peace proposal for Yemen in view of our active cooperation with the special envoys of the Secretary General of the United Nations as well as our efforts to facilitate reconciliation talks among the Yemen parties which resulted in the conclusion of the Stockholm peace accord on HodaydaPort.

I hail from a country that has resisted the most merciless economic terrorism, and has defended its right to independence and science and technology development. The US government, while imposing extraterritorial sanctions and threats against other nations, has made a lot of efforts to deprive Iran from the advantages of participating in the global economy, and has resorted to international piracy by misusing the international banking system.

We Iranians have been the pioneer of freedom-seeking movements in the region, while seeking peace and progress for our nation as well as neighbors; and we have never surrendered to foreign aggression and imposition.We cannot believe the invitation to negotiation of people who claim to have applied the harshest sanctions of history against the dignity and prosperity of our nation. How someone can believe that the silent killing of a great nation and pressure on the life of 83 million Iranians arewelcomed by the American government officials who pride themselves on such pressures and exploit sanctionsin an addictive manner against a spectrum of countries such as Iran, Venezuela, Cuba, China and Russia. The Iranian nation will never ever forget and forgive these crimes and criminals.

The attitude of the incumbent US government towards the nuclear deal or the JCPOA not only violates the provisions of the UN Security Council Resolution 2231, but also constitutes a breach of the sovereignty and political and economic independence of all the world countries.

In spite of the American withdrawal from the JCPOA, and for one year, Iran remained fully faithful to all its nuclear commitments in accordance with the JCPOA. Out of respect for the Security Council resolution, we providedEurope with the opportunity to fulfill its 11 commitments made to compensate the US withdrawal. However, unfortunately, we only heard beautiful words while witnessing no effective measure. It has now become clear for all that the United States turns back to its commitments and Europe is unable and incapable of fulfilling its commitments. We even adopted a step-by-step approach in implementing paragraphs 26 and 36 of the JCPOA. And we remain committed to our promises in the deal. However, our patience has a limit; When the US does not respect the United Nations Security Council, and when Europe displays inability, the only way shall be to rely on national dignity, pride and strength. They call us to negotiation while they run away from treaties and deals. We negotiated with the incumbent US government on the 5+1 negotiating table; however, they failed to honor the commitment made by their predecessor.

On behalf of my nation and state, I would like to announce that our response to any negotiation under sanctions is negative. The government and people of Iran have remained steadfast against the harshest sanctions in the past one and a half years ago and will never negotiate with an enemy that seeks to make Iran surrender with the weapon of poverty, pressure and sanction.

If you require a positive answer, and as declared by the leader of the Islamic Revolution, the only way for talks to begin is return to commitments and compliance.

If you are sensitive to the name of the JCPOA, well, then you can return to its framework and abide by the UN Security Council Resolution 2231. Stop the sanctions so as to open the way for the start of negotiations.

I would like to make it crystal clear: If you are satisfied with the minimums, we will also convince ourselves with the minimums; either for you or for us. However, if you require more, you should also pay more.

If you stand on your word that you only have one demandfor Iran i.e. non-production and non-utilization of nuclearweapons, then it could easily be attained in view of the IAEA supervision and more importantly, with the fatwa of the Iranian leader. Instead of show of negotiation, you shall return to the reality of negotiation. Memorial photo is the last station of negotiation not the first one.

We in Iran, despite all the obstructions created by the US government, are keeping on the path of economic and social growth and prosperity. Iran’s economy in 2017, registered the highest economic growth rate in the world. And today, despite fluctuations emanating from foreign interference in the past one and a half years, we have returned to the track of growth and stability. Iran’s gross domestic product minus oil has become positive again in recent months. And the trade balance of the country remains positive.

The security doctrine of the Islamic Republic of Iran is based on the maintenance of peace and stability in the Persian Gulf and providing freedom of navigation and safety of movement in the Strait of Hurmoz. Recentincidents have seriously endangered such security. Security and peace in the Persian Gulf, Sea of Oman and the Strait of Hormuz could be provided with the participation of the countries of the region and the free flow of oil and other energy resources could be guaranteed provided that we consider security as an umbrella in all areas for all the countries.

The goal of the Coalition for Hope is to promote peace, stability, progress and welfare for all the residents of the Strait of Hormuz region and enhance mutual understanding and peaceful and friendly relations amongst them.

This initiative includes various venues for cooperation such as the collective supply of energy security, freedom of navigation and free transfer of oil and other resources to and from the Strait of Hormuz and beyond.

The Coalition for Hope is based on important principles such as compliance with the goals and principles of the United Nations, mutual respect, equal footing, dialog and understanding, respect to territorial integrity and sovereignty, inviolability of international borders, peaceful settlement of all differences, rejection of threat or resort to force and more importantly two fundamental principles of non-aggression and non-interference in the domestic affairs of each other. The presence of the United Nations seems necessary for the creation of an international umbrella in support of the Coalition for Hope.

The Minister of Foreign Affairs of the Islamic Republic of Iran shall provide more details of the Coalition for Hope to the beneficiary states.

The formation of any security coalition and initiative under any title in the region with the centrality and command of foreign forces is a clear example of interference in the affairs of the region. The securitization of navigation is in contravention of the right to free navigation and the right to development and wouldescalate tension, and more complication of conditions and increase of mistrust in the region while jeopardizing regional peace, security and stability.

The security of the region shall be provided when American troops pull out. Security shall not be supplied with American weapons and intervention. The United States, after 18 years, has failed to reduce acts of terrorism; However, the Islamic Republic of Iran, managed to terminate the scourge of Daesh with the assistance of neighboring nations and governments. The ultimate way towards peace and security in the Middle East passes through inward democracy and outward diplomacy. Security cannot be purchased or supplied by foreign governments.

The peace, security and independence of our neighbors are the peace, security and independence of us. America is not our neighbor. This is the Islamic Republic of Iran which neighbors you and we have been long taught that: Neighbor comes first, then comes the house. In the event of an incident, you and we shall remain alone. We are neighbors with each other and not with the United States.

The United States is located here, not in the Middle East. The United States is not the advocate of any nation; neither is it the guardian of any state. In fact, states do not delegate power of attorney to other states and do not give custodianship to others. If the flames of the fire of Yemen have spread today to Hijaz, the warmonger should be searched and punished; rather than leveling allegations and grudge against the innocence. The security of Saudi Arabia shall be guaranteed with the termination of aggression to Yemen rather than by inviting foreigners. We are ready to spend our national strength and regional credibility and international authority.

The solution for peace in the Arabian Peninsula, security in the Persian Gulf and stability in the Middle East should be sought inside the region rather than outside of it. The issues of the region are bigger and more important than the United States is able to resolve them. The United States has failed to resolve the issue in Afghanistan, Iraq and Syria, and has been the supporter of extremism, Talibanism and Daeshism. Such a government is clearly unable to resolve more sophisticated issues.

Our region is on the edge of collapse, as a single blunder can fuel a big fire. We shall not tolerate the provocative intervention of foreigners. We shall respond decisively and strongly to any sort of transgression to and violation of our security and territorial integrity. However, the alternative and proper solution for us is to strengthen consolidation among all the nations with common interests in the Persian Gulf and the Hormuz region.

This is the message of the Iranian nation:

Let’s invest on hope towards a better future rather than in war and violence. Let’s return to justice; to peace; to law, commitment and treaty and the negotiating table. Let’s come back to the United Nations.