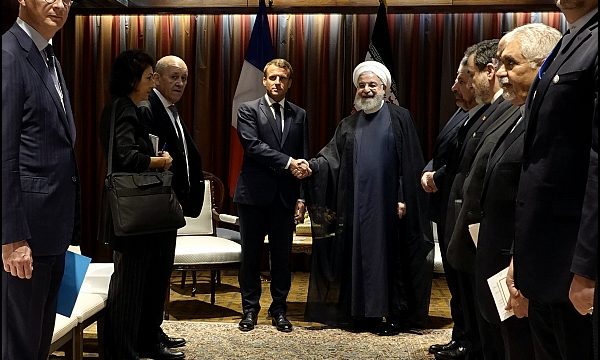 Iran’s Rouhani: Macron’s efforts can be fruitful only if US bans lifted

Press TV – Iranian President Hassan Rouhani says efforts by his French counterpart, Emmanuel Macron to de-escalate Washington-Tehran tensions and save a 2015 nuclear deal will bear fruit only if the sanctions imposed by the United States against Iran are lifted.

Rouhani, who is in New York to attend the 74th session of the United Nations General Assembly, made the remarks while addressing American media managers on Tuesday.

Tensions have been running high between Iran and the United States since May 2018, when US President Donald Trump unilaterally withdrew his country from a multilateral nuclear deal with Iran, officially known as the Joint Comprehensive Plan of Action (JCPOA), and unleashed the “toughest ever” sanctions against the Islamic Republic.

Trump is a stern critic of the deal, which was clinched in 2015 by Iran and the P5+1 group of countries, including the United States, France, Britain, China, Russia, and Germany.

Ever since quitting the JCPOA, Trump has been trying to force Iran into accepting a more wide-ranging alternative that curbs Tehran’s missile program and regional influence.

Macron has been engaged in talks with Tehran and Washington in an effort to ease tensions between the two sides. The French head of state has also been leading European efforts to keep the Iran deal alive.

Rouhani further said, “The French president’s efforts will be effective if Mr. Trump lifts sanctions imposed on Iran after his withdrawal from the JCPOA.”

“At that time, there will be a possibility of negotiations within the frameworks of the P5+1,” the Iranian president added.

He noted that the continuation of sanctions is viewed as the US’s precondition for talks, saying, “This is while we believe that any preconditions should be first lifted for any negotiations.”

Addressing the General Assembly session on Tuesday, Trump threatened to tighten sanctions against Iran, accusing the Islamic Republic of “menacing behavior” in the Middle East.

“All nations have a duty to act. No responsible government should subsidize Iran’s blood lust. As long as Iran’s menacing behavior continues, sanctions will not be lifted. They will be tightened,” the US president told the annual meeting.

The Iranian and French president on Monday held talks in New York on ways to ease regional tensions and save the Iran deal. The two sides also discussed relations between Tehran and Paris.

After his talks with Rouhani, the French president said on Tuesday that he hoped there could be progress on Iran “in the coming hours.”

“We have to get back around the table to have a frank and demanding discussion on the nuclear activity, Iran’s regional activities, the ballistic missile program, but also to have a larger approach on what sanctions are,” Macron told reporters.

In a phone call with his French counterpart earlier this month, the Iranian president said there is no point in talks with the United States as long as it keeps sanctions against the Islamic Republic in place.

“From the viewpoint of Iran’s government, parliament and people, as long as there are sanctions in place, there is no point in negotiating with the US,” Rouhani said.