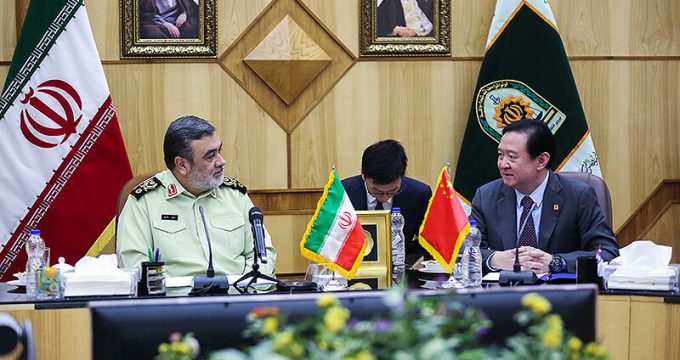 In a meeting with the Chinese Ambassador to Iran Chang Hua, he congratulated the 70th founding anniversary of the People’s Republic of China and appreciated the country for condemning US withdrawal from JCPOA in support of Iran.

“Iran is one of the stable and secure countries in the region, but after a lapse of 40 years since the victory of the Islamic Revolution, enemies have always been seeking to create insecurity in the country,” he said.

When the Americans failed to achieve their goals through the military war they resorted to sanctions to pressure Iranian people and officials, but the Iranian nation has withstood the sanctions and defused their plots in the wake of Supreme Leader’s wise guidelines, he said.

The commander also thanked the Chinese government’s good cooperation with the Islamic Republic of Iran, saying that good communications prevail between the two countries’ officials.

Referring to good interaction between the two countries’ police forces over the past years, Ashtari said that they have also signed agreements these years.

Chinese ambassador, for his part, said, “I have visited different countries, including Syria, Iraq, and Yemen which are experiencing war and unrest, when I came to Iran I witnessed peace and security in the country, which is indicative of police forces’ efforts.”

He also appreciated Iran police for its measures in fighting trans-regional criminals.

Describing Iran as a major country in the region, he said that both countries are necessary to promote mutual cooperation to push their agenda.

Stressing the need for boosting cooperation and share information, he hoped that the two countries would have good collaboration in fighting terrorism.