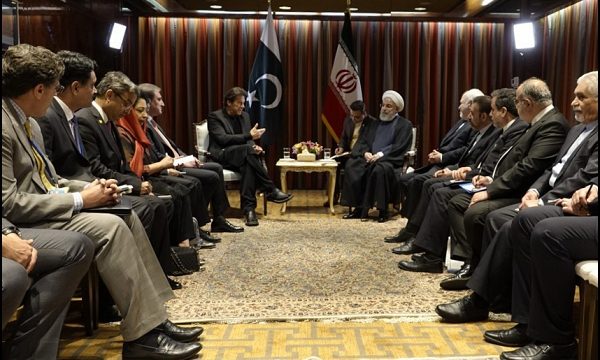 Tasnim – Prime Minister of Pakistan Imran Khan expressed his country’s readiness to cooperate with Iran in the efforts to ease regional tensions.

In a meeting with Iranian President Hassan Rouhani on the sidelines of the UN General Assembly in New York, Imran Khan praised Iran for supporting the Pakistani nation and government over the past decades, saying Islamabad is prepared to give Iran whatever cooperation necessary to reduce tensions in the region.

He also expressed the Pakistani government and nation’s gratitude to Leader of the Islamic Revolution Ayatollah Seyed Ali Khamenei and other Iranian authorities for adopting sensible and principles stances in support of the people of Kashmir.

For his part, Rouhani reaffirmed Iran’s resolve to maintain the good and constructive ties with Pakistan, and called for the immediate implementation of the agreements the two neighbors have signed in the past.

The two officials also discussed the joint efforts for common border security, the fight against terrorism, and restoration of peace and stability to the region.

The Iranian president is going to put forward a new initiative for security of the region in his upcoming address to the UNGA.

“This year, we will be putting forward a plan at the United Nations, according to which the Islamic Republic of Iran –in cooperation with the regional countries– can ensure security in the Persian Gulf and the Sea of Oman with the help of the region’s countries,” Rouhani has said.