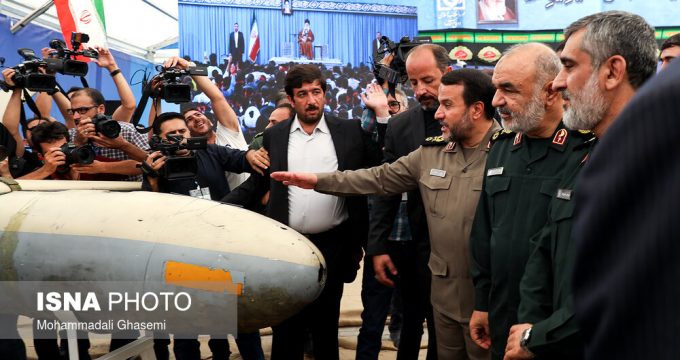 In an exhibition in Tehran on Saturday, the IRGC showcased a British unmanned aerial vehicle, named Phoenix, seized by its Aerospace Division.

Phoenix is an all-weather, day or night, real-time combat surveillance drone. The twin-boom UAV provides surveillance through its surveillance pod, from which the imagery is data linked to a ground control station (GCS) that also controls the aircraft in flight. It has also a maximum flight time of around five hours.

The IRGC also displayed the Aerosonde HQ vertical take-off and landing drone belonging to the US Army used for multi-intelligence payloads such as electronic warfare and communications relay in a single flight.

Aerosonde has been designed for expeditionary land- and sea-based operations and equipped for simultaneous day/night full-motion video. It is field-proven with more than 300,000 flight hours, including desert heat and Arctic cold.

It is equipped with an easy-to-use launch and recovery trailer for constrained land and shipboard operations.

Desert Hawk was another American drone showcased in the exhibition. It has a length of 0.86 meters with a weight of 3.2 kg. It has an endurance of about an hour with an electric motor driving a quiet pusher propeller.

In June, Iran shot down an intruding American spy drone in the country’s southern coastal province of Hormozgan.

The IRGC said in a statement that the US-made Global Hawk surveillance drone was brought down by its Air Force near the Kouh-e Mobarak region — which sits in the central district of Jask County — after the aircraft violated Iranian airspace.

Back in 2015, Iran also downed a US RQ-170 Sentinel stealth aircraft with minimal damage. The drone was flying over the Iranian city of Kashmar, near the Afghan border, when it was brought down.

Known to be able to hack into enemy drones, Iran currently possesses the biggest collection of captured or downed American and Israeli drones, including the US’ MQ1, MQ9, Shadow, ScanEagle, and RQ-170 as well as the Israeli regime’s Hermes.