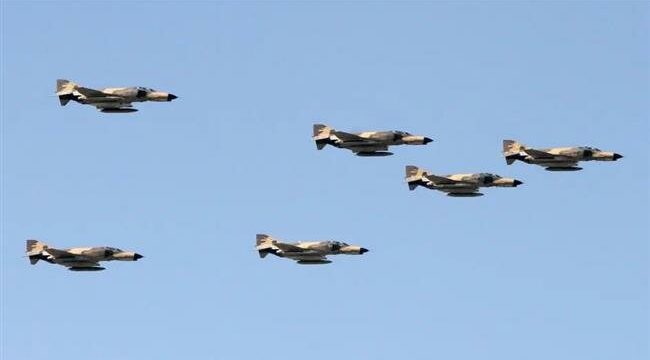 Press TV – Fighter jets of the Islamic Republic of Iran Air Force (IRIAF) and the Islamic Revolution Guards Corps (IRGC) have taken part in joint aerial drills over the Persian Gulf waters ahead of a massive parade slated for Sunday.

Various combat, tactical, reconnaissance, transport, and tanker aircraft of the IRIAF and the IRGC were present at the Friday morning drills.

The exercises, held for the second day, were aimed at increasing the preparedness of the military units for the massive drills due to be held on Sunday on the anniversary of Sacred Defense Week, which marks the beginning of the eight-year war imposed by former Iraqi dictator Saddam Hussein on Iran in 1980.

Earlier on Wednesday, Iranian warplanes took off from Shahid Abdolkarimi Airbase in the port city of Bandar Abbas in southern Iran on the first day of the preparatory drills.

Brigadier General Hamid Vahedi, the lieutenant commander of the IRIAF, said on Thursday the parades send the message of peace and friendship to neighboring countries.

In addition to the jet fighters, 200 frigates and speedboats will also display the country’s naval power during the Sunday parade.

“The parade will be held to display the strengths and capabilities of the Armed Forces, and to boost unity and sympathy among the Army and IRGC forces,” General Vahedi said.

He praised the Islamic Republic’s role in maintaining the sustainable security of the Persian Gulf and the Strait of Hormuz, saying that only regional countries can secure the strategic bodies of water.

The parade is to be held at a time when the US is forming a naval mission, already joined by Saudi Arabia, the United Arab Emirates, and the United Kingdom, purportedly aimed at protecting shipping lanes in the Middle Eastern waterways.

The United States has been trying to persuade its allies to join the international coalition with the declared aim of providing “security” for merchant shipping in the Strait of Hormuz and other strategic shipping lanes in the Middle East.

Washington moved to set up the coalition after pinning the blame on Tehran for two attacks on oil tankers in the Persian Gulf and the Sea of Oman in May and June. Tehran rejected the claims, saying the attacks seemed more to be false-flag operations meant to exert pressure on Iran.

‘Iran to give broad response to any US plot’

Meanwhile, a top military adviser to the Leader of the Islamic Revolution and a senior IRGC general warned the US against any anti-Iran move, saying that the Islamic Republic would respond to any plot by the US from the Mediterranean to the Indian Ocean.

“If the Americans think of any plot, the Iranian nation will respond from the Mediterranean, to the Red Sea and to the Indian Ocean,” said General Yahya Rahim-Safavi.

He said any move against Iran will totally transform the region. “The Americans well know we enjoy a brave leadership and powerful Armed Forces.”

“Our policy is based on creation of peace and sustainable security in the region, and the withdrawal of foreign troops,” the senior general said.

“We hope our ultra-regional foes would know Iran is not after aggression and expansionism, and rather seeks peace and sustainable security,” he added.