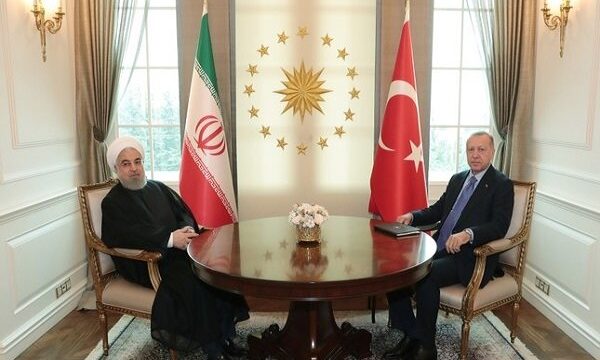 Rouhani, Erdogan meet in Ankara ahead of trilateral summit

MNA – Iranian President Hassan Rouhani and his Turkish counterpart Recep Tayyip Erdogan met and held talks in Ankara on Monday ahead of the Iran-Russia-Turkey trilateral summit on Syria.

Erdoğan greeted Rouhani at the Beştepe Presidential Palace Complex in Ankara and the two leaders proceeded to a closed-door meeting, in which bilateral relations, as well as regional and international developments, are expected to be discussed, the Daily Sabah reported.

Rouhani arrived in Turkey on Sunday night to take part in a trilateral meeting with his Russian and Turkish counterparts in order to discuss a political resolution to the crisis in Syria.

Before leaving Tehran for Ankara on Sunday evening, President Hassan Rouhani told reporters at Tehran’s Mehrabad airport that issues in the region must be resolved through regional dialogue.

Stressing the need to continue the fight against terrorists in Syria’s Idlib region, Rouhani added that Syria’s constitution and the return of the refugees to their homes as two important issues going to be discussed in the trilateral meeting with President Erdogan and President Putin within the Astana format.

Rouhani stressed that the future of Syria belongs to the Syrian people and they must decide on their country’s future, adding that other countries must help the legitimate government of Damascus.