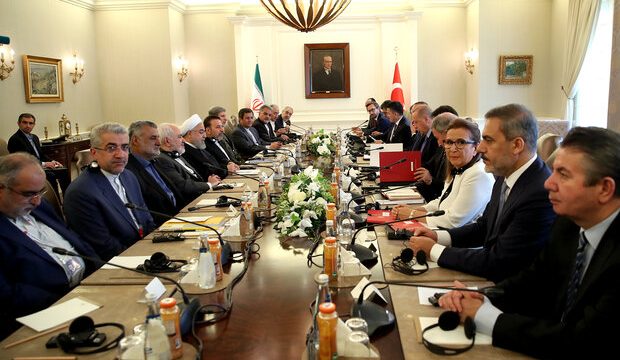 MNA – The Iranian and Turkish presidents described relations and cooperation between the two countries amicable, strong and developing in many fields, stressing the importance of authorities’ work to develop and deepen Tehran-Ankara relations.

President Hassan Rouhani had a meeting with President Recep Tayyip Erdoğan of Turkey on Monday on the sidelines of the Fifth Round of Tripartite Summit of Iran, Russia and Turkey in Ankara, and the two presidents discussed the existing relations and cooperation and ways to develop them.

After the meeting, the two presidents attended the meeting of the high-ranking delegations of Iran and Turkey, in which Hassan Rouhani said “fortunately, relations between Iran and Turkey have always been close and brotherly, and the two governments and nations have stood by each other in different conditions.”

Appreciating the warm hospitality of the Turkish government and people, the Iranian President expressed hope that the visit would yield good results for both nations and the region, especially the people of Syria.

He went on to acknowledge the Turkish government’s clear stances against the United States’ unjust sanctions, “despite hardships, Iran and Turkey will continue their inclusive economic relations.”

The Iranian president also went on to state “the holding of the 27th Joint Commission of Iran and Turkey Cooperation in the coming days is a very important opportunity for further development of these relations and cooperation.”

Iran and Turkey have close points of view in combating terrorism, he said, adding “fortunately, good developments have been made in defence-related cooperation between the two countries. Therefore, Iran-Turkey cooperation in ensuring security in common borders and the region will promote.”

Rouhani said “guaranteeing the security of the Persian Gulf waterways, the Sea of Oman and the Strait of Hormuz has always been important for Iran as the largest littoral state,” adding that the Islamic Republic of Iran considers itself responsible to ensure regional waterways security.

The president added “the security of regional waterways has to be protected only by its littoral states, and that the presence of US forces and its inviting other countries to be present in the region will only increase the existing problems and tensions.”

Rouhani also described the attacks on Yemen as the result of miscalculations and misleading US addresses, saying “we must all work to bring stability back to Yemen with the participation of the United Nations.”

Pointing out that cooperation between the two countries, which guarantees the Astana Process, has made Syria more secure, he said “we must help the Syrian government in fighting the remaining terrorists, especially in Idlib and the Eastern Euphrates until the terrorists are eradicated from the region.”

At the same meeting, the Turkish President Recep Tayyip Erdoğan referred to the friendly and brotherly relations between Iran and Turkey, saying “we are determined to continue the great steps taken in the relations between the two countries.”

The Turkish President added “trade cooperation between the two countries using national currencies has grown significantly and this trend will continue.”

Mr Erdoğan also said “the US sanctions against Iran are unconstructive, and in the Turkish government’s view, preserving the Joint Comprehensive Plan of Action (JCPOA) is an important symbol of the success of dialogue and diplomacy.”

“We hope that as a result of today’s summit and finalisation of the previous summit’s agreements in Sochi brings stability and security to the region, especially in Idlib,” he continued.