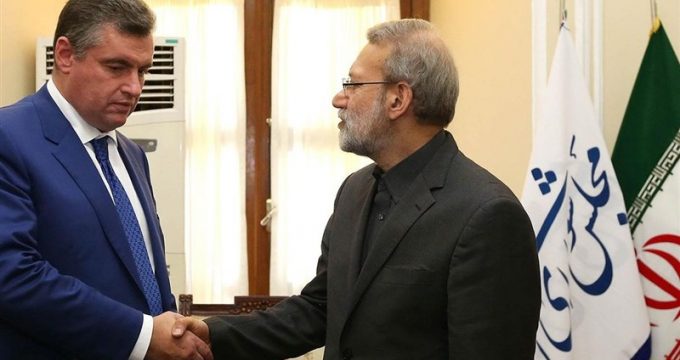 Tasnim – A leading member of the Russian State Duma held a meeting with Iranian Parliament Speaker Ali Larijani in Tehran on Saturday.

He was accompanied by Russia’s Ambassador to Tehran Levan Jagarian.

In the meeting, Slutsky and Larijani stressed the need to boost parliamentary relations between Iran and Russia, and also discussed the latest regional and international issues.

Back in June, a delegation of Iranian lawmakers travelled to Russia to take part in the 2nd International Forum on Development of Parliamentarism.

The Iranian delegation, consisting of members of the Parliament’s National Security and Foreign Policy Commission as well as Iran-Russia parliamentary friendship group and led by vice speaker of the Parliament Massoud Pezeshkian, visited Moscow at the invitation of Chairman of Russia’s State Duma Viacheslav Volodin.