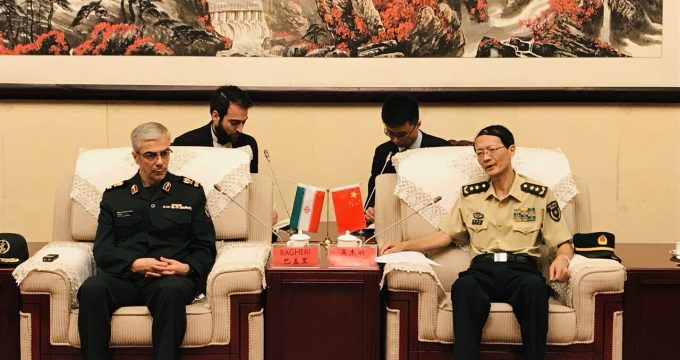 IRNA – Chief of Staff of the Iranian Armed Forces Major General Mohammad Baqeri said in a meeting with his Chinese counterpart on Thursday that Iran’s Supreme National Defense University is ready to transfer its experiences to China’s National Defence University.

Baqeri, who is in Beijing at the invitation of his Chinese counterpart Major General Wu Jieming, said in a meeting with the head of People’s Liberation Army National Defence University that in the past few years the relations between Iran and China have moved toward becoming “strategic” and improving day by day.

Baqeri said the Armed Forces of the two countries have great relations, especially in training and scientific issues.

He said the world is changing and countries are facing various challenges that need research for which universities are the best places.

The Chinese official said in the meeting that the good peaceful ties existing between Iran and China will bring about peace and stability to the region. Good ties are in the interests of both countries and that’s why China is after expanding relations with Iran.

Major General Wu said that the expansion of political relations between Iran and China resulted in the development of ties between the armed forces of the two countries that in the past few years have had good collaborations in training and technical issues.

Saying that Tehran and Beijing should try to implement the agreements signed, he added that the PLA National Defence University, as the country’s biggest defense university, is ready to expand ties with Iranian universities.