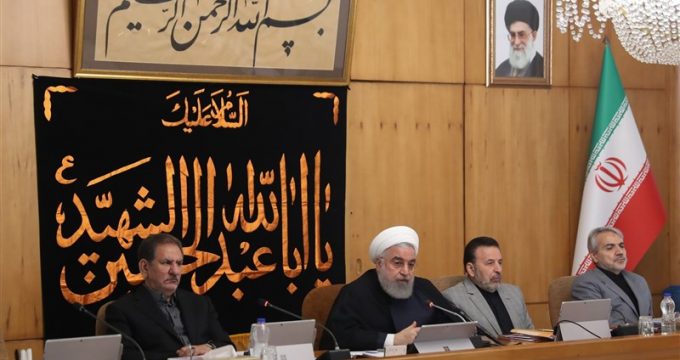 IRNA – Iranian President Hassan Rouhani urged the US to set aside warmongering policies and maximum pressure.

Iran’s logic is to use peaceful nuclear technology exactly the same as its demand in the nuclear deal known as the Joint Comprehensive Plan of Action (JCPOA) requiring reciprocal commitments of all parties to the JCPOA, Rouhani said in his speech to the cabinet meeting.

If they comply with their commitments, Iran will also comply and if not Iran will do the same, he added.

He noted that the third step of Iran’s reduction of the JCPOA commitments is regarded as the most important one and is not comparable with the previous two steps.

On the first anniversary of the US withdrawal from the deal on May 8, 2019, Tehran decided to reduce its commitments to the JCPOA, based on Articles 26 and 36, and set a deadline for Europeans to remedy breaches.

Earlier, President Rouhani said that the government is moving on the right path by reducing its nuclear commitments, stressing that Tehran cannot be patient while the other parties fail to stick to their commitments.

Referring to the fact that today Iran has a peace-seeking and balanced image in the world, Rouhani said Iran has never been initiator of aggression and sanctions and has not violated the commitments first.

In spite of enemy’s pressures, Rouhani referred to growth in stocks, Forex and economic sector, saying it indicates that we can make the enemies disappointed by out resistance.