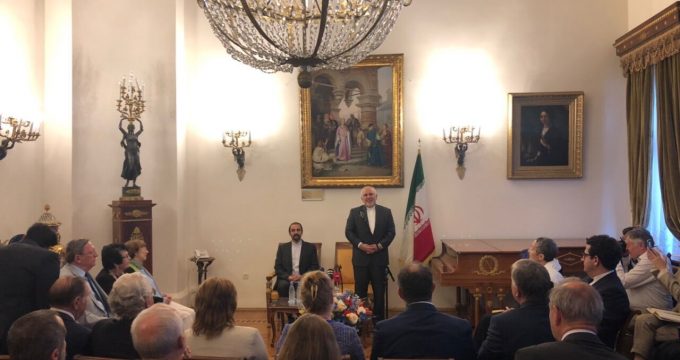 IRNA – Foreign Minister Mohammad Javad Zarif said on Monday that Iran-Russia relations have increased in all fields as prospect of such ties seems very promising.

He made the remarks in a meeting with the Russian well-known Iranologists who gathered at Iran’s Embassy in Moscow on Monday.

“I believe that world’s biggest problem today is incorrect understanding about the current situation,” he said.

The illusion of regional hegemony has escalated conflicts, he said, noting that for the same reason role of the people with high knowledge about the international developments would be of high importance.

“Development of Iran-Russia cultural relations will help us make less strategic mistakes,” he said, noting that that’s for the same reason leader of the two countries have decided to enhance ties to higher level.

Describing Iran, Russia and China as powerful countries standing against US hegemony, Zarif, said, “I believe our Chinese and Russian friends similarly believe that the era of US hegemony is over but the US has its own dreams.”

Today, the US has turned all the international deals into an instrument to benefit more and this will be very dangerous for the future of the world and even the US, he said.