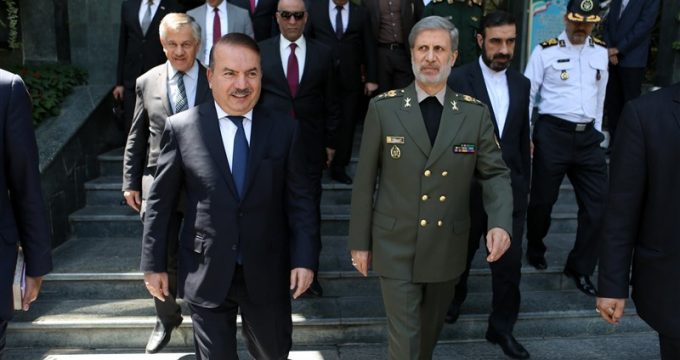 “Fortifying Iraq’s defense power is one of the Islamic Republic of Iran’s main strategies,” Brigadier General Hatami said in a meeting with Iraq’s Interior Minister Yassin Taher al-Yasiri in Tehran on Sunday.

Highlighting the need to enhance the capabilities of the Iraqi military and police forces, the Iranian defense minister added, “We deem the security of Iraq as being in line with our own security, and care about Iraq’s security to the same extent that we make efforts for our own stability and security.”

The general also stressed the need for constant consultations between Tehran and Baghdad, saying that Iran’s support for Iraq in the fight against terrorism was not a short-term or tactical measure, but a decision deriving from faith and part of a long-term strategy.

The visiting Iraqi minister, for his part, expressed gratitude to Iran for assisting Iraq in the war on terrorism, saying close military and security cooperation with Tehran is a top priority for the Baghdad government.

Iraqi politicians and military forces regard Iran as a reliable backing in times of crises, Yasiri added.

In July 2017, Iran and Iraq signed an agreement to boost military cooperation in a host of fields, including counterterrorism.

Based on the deal, Tehran and Baghdad try to promote interaction and share experiences in the fight against terrorism and extremism, work together to ensure border security, and provide each other with training and logistical, technical and military support.

By relying on local experts, the Iranian Air Defense is ready to help Iraq in manufacturing and providing technical support for various air defense systems, the Iranian general said at a meeting with Major General Tariq Abbas Ibrahim Abdul Hussein, chairman of the Iran-Iraq joint commission, held in Tehran.